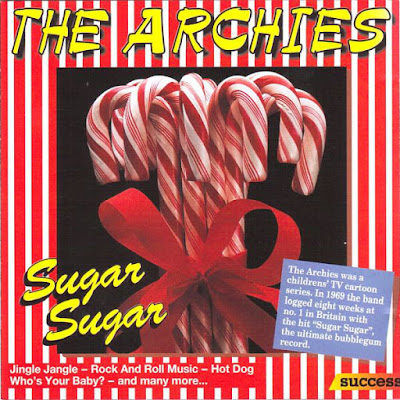 Most '60s bubblegum groups were faceless studio concoctions, made up of hired professionals and given nominal group identities after the fact. The Archies made no pretense of being a real band in the first place -- their music, including the smash hit "Sugar, Sugar," was "performed" by the animated TV cartoon characters spun off from Archie comics. In reality, of course, they were a studio concoction made up of hired professionals (most notably lead singer Ron Dante), but in this case, they weren't technically faceless.

The Archies were created by promoter Don Kirshner, who was coming off a major success as the creator of the Monkees. In late 1967, Kirshner was hired as music supervisor for CBS' new Saturday morning cartoon The Archie Show, which was to feature a new original song every week. He immediately brought on producer Jeff Barry, who with Ellie Greenwich had formed one of the preeminent songwriting teams of the girl-group era (Greenwich also sang on several Archies records). Kirshner's original choice for lead singer was Kenny Karen, but Barry brought in Ron Dante, an experienced session singer who'd fronted the Detergents' novelty parody "Leader of the Laundromat"; Dante had met Barry at a Neil Diamond session, and had previously cut promos for Kirshner. Dante won the job, and Barry hired Jeannie Thomas as the group's female vocalist. When the TV show debuted, it was a hit, and the first Archies single, "Bang Shang-a-Lang," nearly made the Top 20 in late 1968.

Shortly thereafter, Barry hired songwriter/backing vocalist Andy Kim, and replaced Thomas with Toni Wine. Barry and Kim co-wrote "Sugar, Sugar," which became a breakout smash in 1969; it topped the charts for four weeks, sold over three million copies in the U.S. alone, and wound up as Billboard's number one song of the year. Meanwhile, the TV show was expanded to a full hour, and Dante enjoyed a simultaneous Top Ten hit during "Sugar, Sugar"'s run, thanks to his lead vocal on the Cufflinks' "Tracy." The follow-up, "Jingle Jangle," reached the Top Ten, but from there the Archies' chart success tailed off quickly. Their last Top 40 hit came in the spring of 1970 with "Who's Your Baby?"; the same year, Donna Marie replaced Toni Wine.

However, by the end of 1970 Barry left the Archies to pursue other projects, and stories detailing the group's breakup named their primary personnel for the first time. Their final Barry-produced single was released in early 1971, although "A Summer Prayer for Peace" became a hit in South Africa later that summer. Ron Dante embarked on a short-lived solo career before moving into record production, and found substantial success as Barry Manilow's producer throughout the '70s; he also returned to singing on commercial jingles. Andy Kim went on to score a substantial solo hit in 1974 with "Rock Me Gently."

The Archies Christmas PartyIn 2008, Ron Dante revived the Archies name, brought in two vocalists to play Betty and Veronica (Danielle van Zyl and Kelly-Lynn), and released The Archies Christmas Party album on the Fuel 2000 label. Right around that time, Dante, who by now owned the rights to the original recordings, oversaw the reissue on CD of all the band's original albums. In 2016, Goldenlane Records reissued all five Archies albums under the title Sugar, Sugar: The Complete Albums Collection. 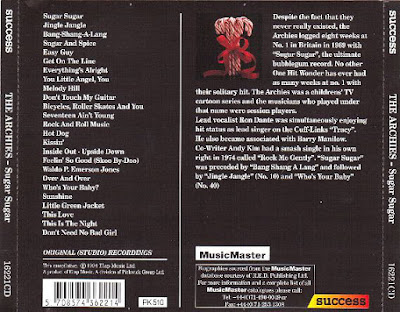