Where The Girls Are Vol 10 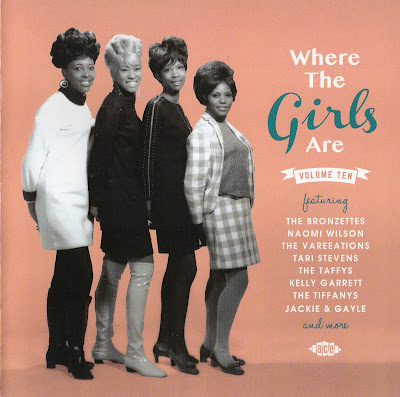 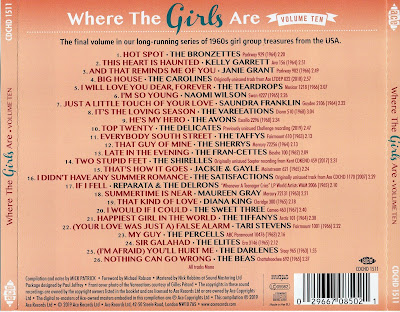 The final volume in our long-running compilation series of girl group treasures from the USA. Highlights include ‘Hot Spot’ by Philly girl group the Bronzettes, a dancefloor-friendly gem produced by Chubby Checker; ‘Nothing Can Go Wrong’ by Los Angeles’ the Beas, a jangly nugget that sounds like the Bangles many years ahead of their time; ‘Big House’, a Spector-style opus by the Carolines of New York, and the previously unissued ‘Top Twenty’ by the Delicates. The collection comes with a picture-packed 24-page booklet featuring in-depth notes by Ace’s in-house girl group buff Mick Patrick.

Back in 1984, “Where The Girls Are” was on vinyl. Compiled by Mick Patrick and Ady Croasdell, a few of the tracks might seem familiar by today’s standards – Ruby & the Romantics’ ‘Our Day Will Come’, for instance – but in ’84 that compilation LP in particular was a much-needed answer to those looking beyond the obvious ’elles and ’ettes into a girls’ world of forgotten US 60s groups and artists whose day indeed would come. By the 90s, everybody was consuming back catalogue on compact disc, vinyl now relegated to the collectors and charity shops, and a British answer to the Stateside girl group era was of main concern to many (including myself). Mick and steadfast compilation cohort Malcolm Baumgart answered our calling with the Brit-centric “Here Come The Girls” series, the success of which left everyone wondering whether the US girls would get their moment. Thankfully, in 1997, Mick and Malcolm instigated the “Where The Girls Are” CD series, the tenth and final volume of which is issued this month.

The series shone a light on a variety of girl group styles, each volume coming with its fair share of ear-openers. The first got off to a smashing start with the Goodees’ ‘Condition Red’, let us in on the previously unissued ‘Look In My Diary’ by Reparata & the Delrons and dropped in a gem by an artist not normally associated with the girl group genre – ‘Don’t Drop Out’ by Dolly Parton (sounding much more Queens, New York than Dollywood, Tennessee). Some later editions were more specialised: the third and fourth focused on the Chess and Atlantic labels, represented by Mary & the Desirables and Shirley Matthews & the Big Town Girls respectively, whilst the fifth was an eclectic listen raiding the vast Columbia vaults which saw girl gang the Pussycats rubbing Franklin sisters Aretha and Erma up the right way. Other volumes – the most recent down to Mick flying solo – followed the more all-encompassing formula of the first, introducing us along the way to long-lost tracks by the Bunnies, Cinnamons, Zippers, Bitter Sweets, Utopias, Popsicles, Azaleas, Drake Sisters and countless more where they came from.

And so, their day did come. But all good things must come to an end and, although this is the final volume, you can be certain Mick will continue curating the girl group sound in some shape or form for many more years to come, for wherever he is, needless to say, that’s where the girls are too.

1 –The Bronzettes Hot Spot
2 –Kelly Garrett (3) This Heart Is Haunted
3 –Janie Grant And That Reminds Me Of You
4 –The Carolines (2) Big House
5 –The Teardrops I Will Love You Dear, Forever
6 –Naomi Wilson I'm So Young
7 –Saundra Franklin Just A Little Touch Of Your Love
8 –The Vareeations It's The Loving Season
9 –The Avons (4) He's My Hero
10 –The Delicates Top Twenty
11 –The Taffys Everybody South Street
12 –The Sherrys That Guy Of Mine
13 –The Fran-Cettes* Late In The Evening
14 –The Shirelles Two Stupid Feet
15 –Jackie & Gayle That's How It Goes
16 –The Satisfactions I Didn't Have Any Summer Romance
17 –Reparata And The Delrons If I Fell
18 –Maureen Gray Summertime is near
19 –Diana King (4) That Kind Of Love
20 –The Sweet Three I Would If I Could
21 –The Tiffanys Happiest Girl In The World
22 –Tari Stevens (Your Love Was Just A) False Alarm
23 –The Percells My Guy
24 –The Elites Sir Galahad
25 –The Darlenes (I'm Afraid) You'll Hurt Me
26 –The Beas Nothing Can Go Wrong

tags Where The Girls Are