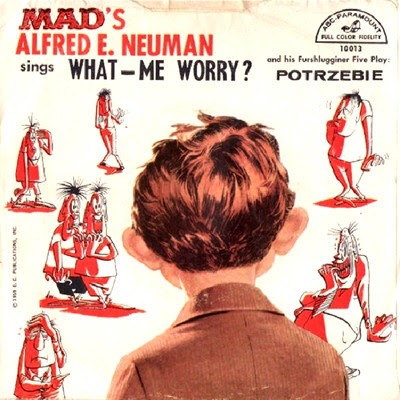 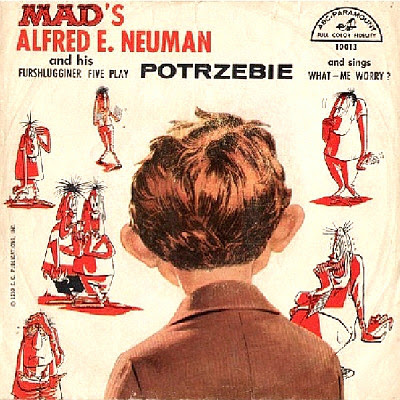 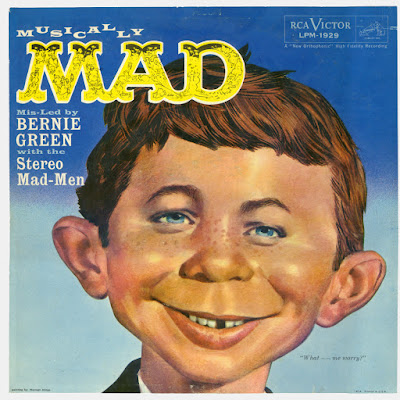 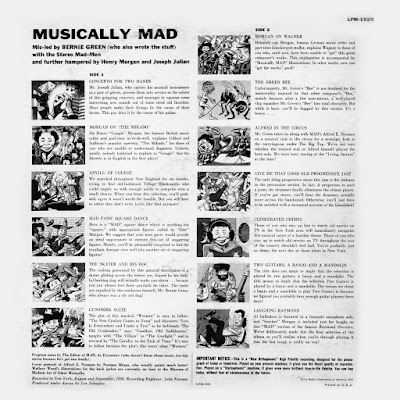 Mad has sponsored or inspired a number of recordings. In 1959, Bernie Green "with the Stereo Mad-Men" recorded the album Musically Mad for RCA Victor, featuring music inspired by Mad and an image of Alfred E. Neuman on the cover; it has been reissued on CD. That same year, The Worst from Mad #2 included an original recording, "Meet the staff of Mad", on a cardboard 33 rpm record, while a single credited to Alfred E. Neuman & The Furshlugginger Five: "What – Me Worry?" (b/w "Potrzebie"), was issued in late 1959 on the ABC Paramount label.

Two additional albums of novelty songs, written by Norman Blagman and Sam Bobrick and performed by The Dellwoods, were released by Bigtop Records in 1962–63: "Mad 'Twists' Rock 'N' Roll" and "Fink Along with Mad". The latter album featured a song titled "It's a Gas", which punctuated an instrumental track with belches (along with a saxophone break by an uncredited King Curtis).[citation needed] Dr. Demento featured this gaseous performance on his radio show in Los Angeles in the early 1970s. Mad included some of these tracks as plastic-laminated cardboard inserts and (later) flexi discs with their reprinted "Mad Specials".

A number of original recordings also were released in this way in the 1970s and early 1980s, such as Gall in the Family Fare (a radio play adaptation of their previously illustrated All in the Family parody), a single entitled "Makin' Out", the octuple-grooved track "It's a Super Spectacular Day", which had eight possible endings, the spoken word Meet the staff insert, and a six-track, 30-minute Mad Disco EP (from the 1980 special of the same title) that included a disco version of "It's a Gas". The last turntable-playable recording Mad packaged with its magazines was "A Mad Look at Graduation", in a 1982 special. A CD-ROM containing several audio tracks was included with issue #350 (October 1996). Rhino Records compiled a number of Mad-recorded tracks as Mad Grooves (1996).