The Peanut Butter Conspiracy - Is Spreading & The Great Conspiracy (1967-68) 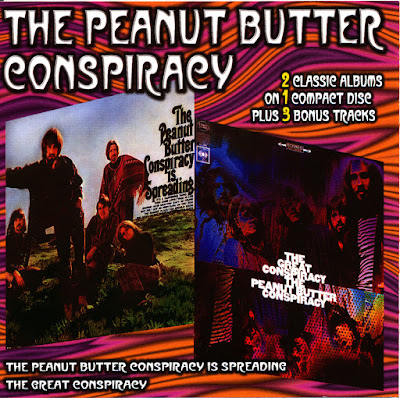 The Peanut Butter Conspiracy Is SpreadingLos Angeles psychedelic band the Peanut Butter Conspiracy emerged in 1966 from the remains of the Ashes, formed the previous year by singer Pat Taylor, guitarist John Merrill, bassist Alan Brackett, and drummer Spencer Dryden (who soon left the group to replace Skip Spence in the Jefferson Airplane). Adding drummer Jim Voigt as Dryden's replacement, the Ashes recorded a self-titled LP for the Vault label before disbanding, with Merrill, Brackett, and Voight recruiting singer Sandi Robison and harpist/guitarist Lance Fent to form the Peanut Butter Conspiracy; after debuting on Vault with the single "Time Is After You," the band signed to major-label Columbia, where 1967's "It's a Happening Thing" heralded the spring release of their debut LP, the Gary Usher-produced The Peanut Butter Conspiracy Is Spreading. Ex-Sound Machine guitarist Bill Wolff replaced Fent for the follow-up, The Great Conspiracy, which like its predecessor failed to make much of a commercial impact; only Robison, Merrill, and Brackett remained for 1969's For Children of All Ages, which featured new keyboardist Ralph Shuckett and drummer Michael Stevens. The Peanut Butter Conspiracy disbanded soon after, with Brackett pursuing studio work, Fent later collaborating with Randy Meisner, and Wolff joining Fusion.

The Peanut Butter Conspiracy Is Spreading 1967

If you want to know why producer Gary Usher is revered in some circles, play The Peanut Butter Conspiracy Is Spreading next to the pretty much self-produced For Children of All Ages. A name as trendy as the Jefferson Airplane -- and a sound that is absolutely the Airplane -- meets the Mamas & the Papas; the '60s guitars sound smart; the 1967 liner notes by Lawrence Dietz tell you nothing about the group; and the front cover looks like something Peter Fonda and Dennis Hopper encountered during Easy Rider. "It's a Happening Thing," like much of this record, tries too hard. Decades after it was recorded, there is charm in a band like the PBC (which rhymes with PCP) being such an authentic figment of someone's countercultural imagination. Sandi Robison is stunning on "Then Came Love," and the production by Gary Usher really is impressive -- it makes the record something special. But if the intro to "Twice Is Life" sounds like the Monkees (and it does), The Peanut Butter Conspiracy ends up sounding like an FM version of Spanky & Our Gang. Spanky McFarlane's hits are what made her so hip, and the PBC's lack of hits makes for an interesting trip back to the days of flower power, and not much else. "You Took Too Much" has gorgeous harmonies, a sing-songy guitar riff, and lyrics bogged down by blatant references to the hippy-dippy mindset of a record company trying to cash in. "Second Hand Man" could be Peter, Paul & Mary on mescaline. That's not a knock; the song actually works in its audacity. A very hip oldies station could play this and attract listeners. It's just hard to take songs like "Why Did I Get So High" seriously when artists like Marty Balin and Grace Slick were freaking out their record label and doing this for real. But credit must be given when it is due -- the Peanut Butter Conspiracy was everything the Ultimate Spinach aspired to be, and this record has merit and is very listenable despite the flaws.

The Great Conspiracy, the second long-player from the Los Angeles-based Peanut Butter Conspiracy, was much more a reflection of their live sound than their debut effort, the pop-driven Peanut Butter Conspiracy Is Spreading (1967). Around 1964, the quintet was literally born from the Ashes (another burgeoning L.A. rock combo whose personnel featured soon-to-be Jefferson Airplane drummer Spencer Dryden). After solidifying their lineup, they inked a deal with Columbia Records, which assigned staff producer Gary Usher to work with them. His well-meaning but over-the-top production style diffused the band, which came off sounding more like the Mamas & the Papas than the Jefferson Airplane or It's a Beautiful Day -- both of whom also sported female lead singers. However, by the time of this release the Conspiracy were sonically asserting themselves with a decidedly hipper approach. This is especially evident on the stretched-out and psychedelic "Too Many Do" and the deliciously trippy "Ecstasy" -- which sports frenzied and wiry fretwork similar to that of Quicksilver Messenger Service string man John Cipollina. Equally inspired are "Lonely Leaf" and the somewhat paranoid and darkly guilded "Time Is After You." These contrast with the somewhat ersatz hippie fodder "Turn on a Friend (To the Good Life)," the 38-second throwaway "Invasion of the Poppy People," or the simply wretched "Captain Sandwich." [In 2000 the Collectables reissue label coupled both The Peanut Butter Conspiracy Is Spreading and The Great Conspiracy on a single CD. Also included were the 45-rpm sides "I'm a Fool" and "It's So Hard" as well as the previously unissued track "Peter Pan." 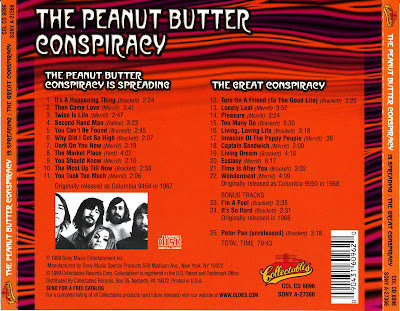