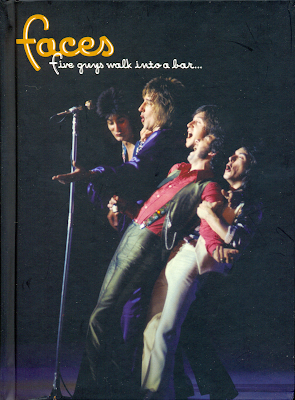 When Steve Marriott left the Small Faces in 1969, the three remaining members brought in guitarist Ron Wood and lead singer Rod Stewart to complete the lineup and changed their name to the Faces, which was only appropriate since the group now only slightly resembled the mod-pop group of the past. Instead, the Faces were a rough, sloppy rock & roll band, able to pound out a rocker like "Had Me a Real Good Time," a blues ballad like "Tell Everyone," or a folk number like "Richmond" all in one album. Stewart, already becoming a star in his own right, let himself go wild with the Faces, tearing through covers and originals with abandon. While his voice didn't have the power of Stewart, bassist Ronnie Lane's songs were equally as impressive and eclectic. Wood's rhythm guitar had a warm, fat tone that was as influential and driving as Keith Richards' style.

Ooh La LaNotorious for their hard-partying, boozy tours and ragged concerts, the Faces lived the rock & roll lifestyle to the extreme. When Stewart's solo career became more successful than the Faces, the band slowly became subservient to his personality; after their final studio album, Ooh La La, in 1973, Lane left the band. After a tour in 1974, the band called it quits. Wood joined the Rolling Stones, drummer Kenny Jones eventually became part of the Who, and keyboardist Ian McLagan became a sought-after supporting musician; Stewart became a superstar, although he never matched the simple charm of the Faces.
While they were together, the Faces never sold that many records and were never considered as important as the Stones, yet their music has proven extremely influential over the years. Many punk rockers in the late '70s learned how to play their instruments by listening to Faces records; in the '80s and '90s, guitar rock bands from the Replacements to the Black Crowes took their cue from the Faces as much as the Stones. Their reckless, loose, and joyous spirit stayed alive in much of the best rock & roll of the subsequent decades.

Lane was diganosed with multiple sclerosis in the 1970s but continued to work. He relocated to Austin, Texas in the 1980s and worked until the disease claimed his life in 1997.

MacLagan also relocated to Austin, where he became an integral part of the city's vibrant music scene. In addition to leading his own group, the Bump Band, he collaborated with musicians--well known and obscure--in recording sessions and on the stage. He suffered a stroke on December 2, 2014, and passed away a day later. 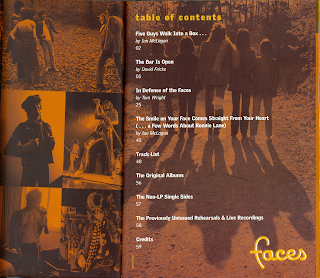 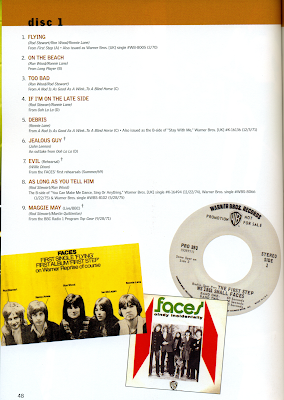 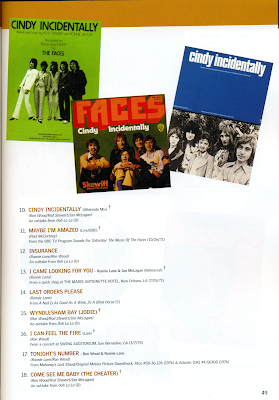 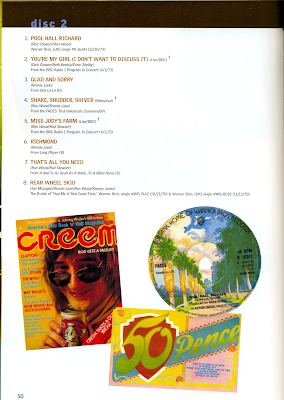 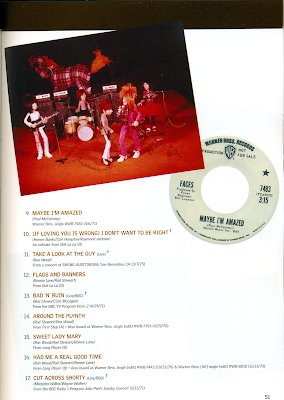 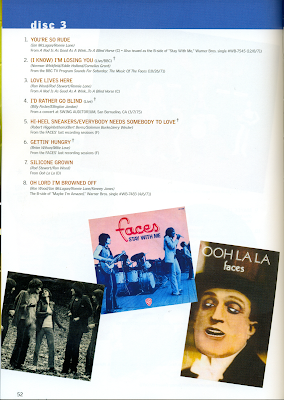 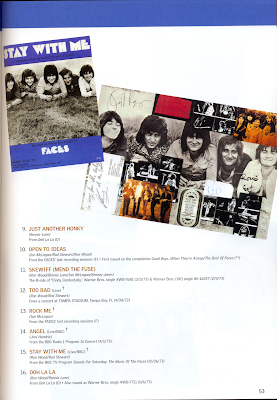 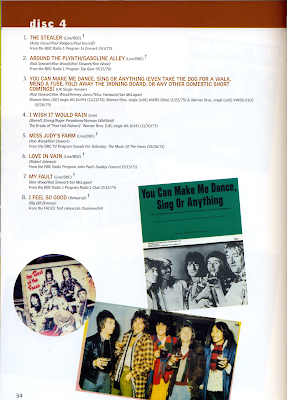 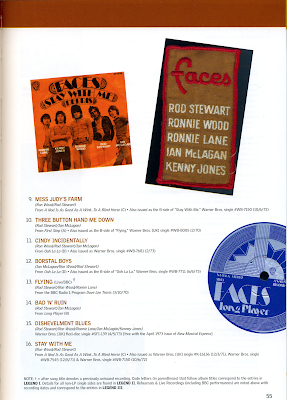 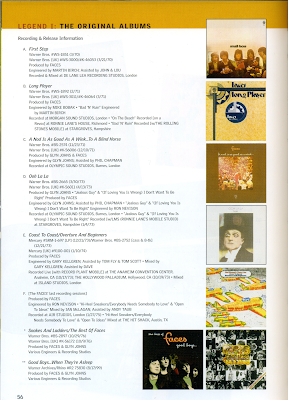 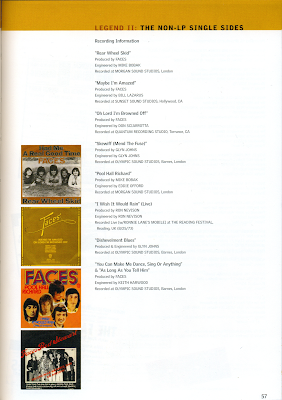 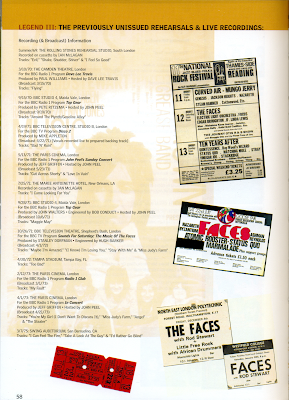 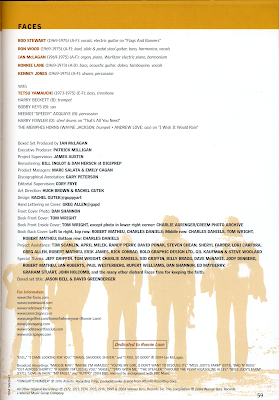 There has never been a better box set than the Faces' Five Guys Walk into a Bar.... There has never been a box that captures an artist so perfectly, nor has a box set taken greater advantage of unreleased and rare material, to the point where it seems as essential and vital as the released recordings. Simply put, there's never been a box set as necessary as this, since it tells the band's entire tale and explains exactly what the fuss is all about. Unfortunately, some explanations are in order, since the Faces never made it big, resigned to cult status in America and Britain alike. Nevertheless, if you love rock & roll with an all-consuming passion, you may consider the Faces the greatest rock & roll band ever. And you'd be right. Other bands were certainly bigger and plenty wielded a stronger influence, but the Faces were something unique, an endearingly ragged quintet that played raw, big-hearted rock & roll as hard as the Rolling Stones, but with a warm, friendly vibe that would have sounded utterly foreign coming from the Stones. At the turn of the '60s, that warmth was unusual in rock & roll, since most of the big bands were larger than life; even the Kinks, the quaintest and quietest of the titans of the late '60s, had a theatrical bent that lent them a mystique.

In contrast, the Faces were utterly without mystique. They were unpretentious to a fault, coming across like the lovable lads from the neighborhood who were always out for a good time, whether it was before, during, or after a gig. They were unassuming and mischievous, with their raggedness camouflaging a sweetness that flowed throughout their music; they were charming rogues, so endearing that even the infamously cranky, trendsetting British DJ John Peel had a soft spot a mile wide for them. That raggedness resulted in exhilarating music, but also made the Faces inconsistent on-stage and in the studio. At their peak, nobody could touch them, but even their greatest albums were sloppy, never maintaining their momentum. They would also throw away great songs on non-LP singles, and their live performances -- including BBC sessions for Peel -- often had a raucous energy not quite captured on their albums. All of these elements taken as a whole add up to a great band, but no single album, not even the first-rate 1999 compilation Good Boys When They're Asleep, captured each of these elements.

Five Guys Walk into a Bar... does. Produced and sequenced by their keyboardist, Ian McLagan, the set throws all conventional rules of box sets out the window. It's not assembled in a chronological order. A grand 43 of its 67 tracks are non-LP cuts and rarities, including a whopping 31 previously unreleased tracks. It has all the B-sides never released on CD. Several songs are repeated in alternate live or studio versions. Such a preponderance of rarities would usually mean that a box set is only for the devoted, but that's not the case here -- these rarities are the very reason why Five Guys Walk into a Bar... succeeds in a way none of their original albums do, since they fill in the gaps left behind on their four studio albums. This does mean that it features several Rod Stewart solo cuts that worked their way into the Faces' repertoire (partially because the band backed him on his solo albums, too), but that was an important part of their history (plus, the BBC version of "You're My Girl [I Don't Want to Discuss It]" is blistering hot), and while this showcases Stewart at his best -- he never was better than he was in the early '70s, whether it was fronting the Faces or on his solo records -- he never overshadows his mates on this box.

The focus is on the band as a whole, which means that the spotlight is shone on the late, perpetually underappreciated Ronnie Lane numerous times on each of the four discs, and that Ronnie Wood has his turn at the microphone on a wonderful live "Take a Look at the Guy." McLagan's song sequencing may appear to have no logic behind it, since it doesn't group recordings together by either era or scarcity, yet his seemingly haphazard approach makes musical and emotional sense, flowing like a set list yet remarkably maintaining momentum through its four lengthy discs. While it may sound like hyperbole, there's never a dull moment here, not a bad track among these 67 songs -- it's consistent in a way the Faces never were when they were together. It's a joyous, addictive listen, too. It sounds like a party, one where everybody's invited and where the music doesn't stop playing until the break of dawn. That makes a perfect tribute for a band that never got the respect they were due, and never made the great album they should have made. With Five Guys Walk into a Bar..., the Faces finally have that great album and not just that, they have a box set that's as infectious and satisfying as any classic rock & roll album and a box set that's quite possibly the greatest box set ever made. Plus, it's just one hell of a good time.