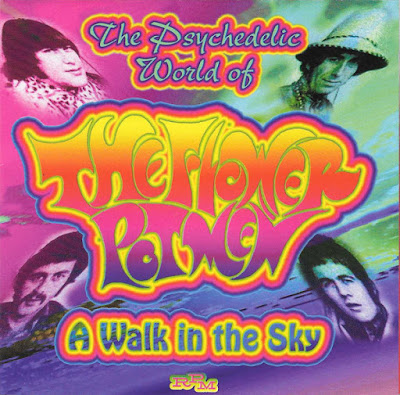 The Flower Pot Men were a studio recording construct created by John Carter and Ken Lewis, originally the main songwriters of The Ivy League. They notably were featured as backup vocalists for early Who albums and for the first recording of The Sagittarius', "My World Fell Down".Ken Lewis departed as a result of his lack of interest to tour, and Carter joined him soon after to create a musical songwriting duo. 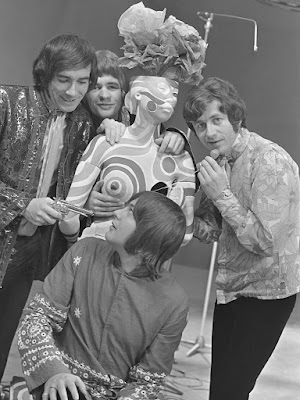 "Let's Go to San Francisco" was written and recorded by John Carter and Ken Lewis, a songwriting team known as Carter & Lewis. The composition, psychedelic in nature, took vocal and instrumental inspiration from The Beach Boys. The name The Flower Pot Men was derived from the BBC children's show Flower Pot Men, with the obvious psychedelic era puns on flower power and "pot" (cannabis). In the US, they were commonly deemed The Flower Men on radio airplay to avoid the drug reference.

The duo licensed the recording to Deram Records, who had a hit but no group to promote it. Carter and Lewis, having no interest in going on the road to promote the record, created the group from a hand-picked collective of recording studio session musicians and vocalists. Led by vocalist Tony Burrows, who had been in the Ivy League with Carter and Lewis, the band also included Billie Davis's backing band, and for a while (though not for recordings) later Deep Purple members Jon Lord, who replaced Billy Davidson on keyboards in January 1968, and Nick Simper on bass.

Carter and Lewis continued to write, record and produce most of the band's subsequent recordings over the next three years.

The follow-up to "Let's Go to San Francisco" was the similar-sounding "A Walk in the Sky", released in November 1967. It was not a hit in the UK, but reached No. 4 in the Netherlands and also proved popular in Germany. Carter and Lewis continued writing and recording new material, but Deram wanted another hit to rival the success of "Let's Go to San Francisco". When the third Carter-Lewis single "Man Without a Woman" / "You Can Never Be Wrong" failed to chart in April 1968, the label had the touring band record "In A Moment of Madness" by Roger Greenaway without the involvement of Carter and Lewis, which also failed to chart. As Mark Frumento wrote in the liner notes of the retrospective Flower Pot Men album, Listen to the Flowers Grow: "At this point Deram decided that the Flower Pot Men name was no longer commercial and the next single, "Piccolo Man" was released under the band name 'Friends' ... The final Flower Pot Men single was released in 1969, but this time the writing team Roger Cook and Roger Greenaway were behind the production."

The line-up of the Flower Pot Men had changed considerably by then. Lord and Simper left in summer 1968, Neil Landon in December 1968 to become lead singer of Fat Mattress. Neil was then replaced by backing band member Ricky Wolff in January 1969. Wolff, Burrows, Shaw and Nelson stayed with Greenaway, added new musicians and changed their name to White Plains, who scored a hit with "My Baby Loves Lovin'" in 1970. The Flower Pot Men dissolved at that point.

Burrows and Shaw later surfaced in another John Carter project, The First Class, whose sole Top 40 hit was "Beach Baby". A harmony phrase shortly before the fade out of this record referenced "Let's Go to San Francisco". Carter also recorded a track "Let's Go Back To San Francisco (Parts 1 and 2)", released as 'Beautiful People' in 1981. Later the song appeared on a First Class retrospective and ultimately appeared on a compilation album by the Flower Pot Men.

In 2000 Carter released a CD Peace Album / Past Imperfect that comprised two unreleased Flower Pot Men albums recorded between 1967 and 1969. Burrows still performs on the oldies circuit as does Landon. Shaw is still on the road with White Plains.

In the liner notes of Listen to the Flowers Grow (RPM Retro 809) from April 2007, Mark Frumento mentioned that "..sadly, Pete Nelson died a few years ago.."

Singer Tony Burrows' voice is also heard on many UK hit singles of that era, such as, White Plains: "My Baby Loves Lovin'", Brotherhood of Man: "United We Stand", Edison Lighthouse: "Love Grows (Where My Rosemary Goes)", The First Class: "Beach Baby" and The Pipkins: "Gimme Dat Ding".

Lord and Simper's connection to this pop band was later lampooned in the fake rock documentary Spinal Tap, whose fictional first hit was called "(Listen to the) Flower People", a reference to "Let's Go to San Francisco". 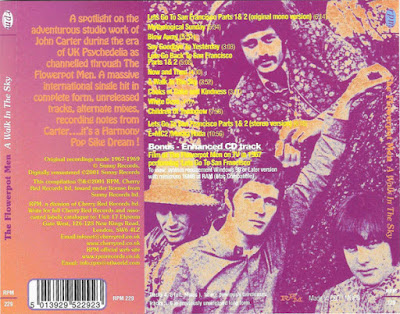