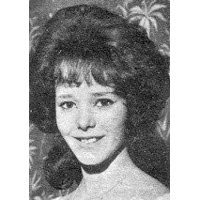 Here Are Four Singles Of Jeannie and the Big Guys

Jeannie and the Big Guys were a Chester quintet, originally called Four Hits & A Miss, the "Miss" being teenaged lead singer Rita Hughes, the daughter of a Chester pub owner, who fronted the group as lead singer for a year or so. As Four Hits and A Miss, their repertory included songs like "Lullaby of Birdland." They became the hottest group in Chester and were signed to Pye in 1963, when Hughes was 17, changing their name to Jeannie and the Big Guys in the process. They cut "Boys" by the Shirelles, which they'd likely heard the Beatles perform, and "Sticks and Stones, " an old Ray Charles number, but saw no chart action. They had a pretty fair Mersey-style r&b sound, but the group broke up when "Jeannie" exited, after a dispute over dressing room decorum, according to the music press of the period, moving over to front Earl Royce and the Olympics, a Liverpool band led by Billy Kally aka Earl Royce (but never recording with them), before going solo-she cut a pair of singles, "A Love Like Yours" and "Lonely City Blue Boy, " under the name Cindy Cole. She later became a successful cabaret artist in her home town, before passing away in 1989.

tags Jeannie and the Big Guys