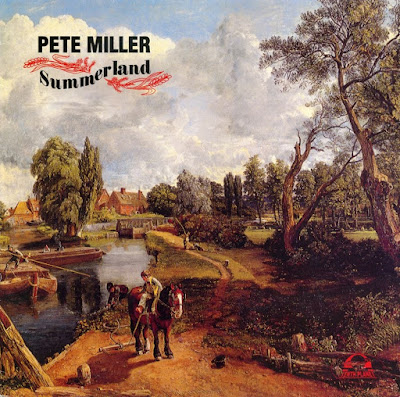 This mysterious British guitarist  Pete Miller cut some oddball non-hits in the '60s that have amassed quite a reputation among psychedelic collectors. Starting out as a member of minor British group Peter Jay & the Jaywalkers, he went solo in late 1965 with "Baby I Got News for You," a Troggsish number with wads of fuzzy guitar. Billed simply as "Miller," Pete was backed on the recording by Peter Frampton and members of the Herd.

For the next few years he concentrated on writing for British music publishers, and recording demos for himself. A second single, "Cold Turkey," this time billed to Big Boy Pete, was issued in early 1968. With its eerie blasts of spaceship-elevator psychedelic guitars and biting mod-psych vocals, "Cold Turkey" fully deserves its classic status, though few heard it at the time. In a further twist to the already odd Big Boy Pete story, Miller refused to tour; a different singer was sent out in his place, leading to a good deal of "who really was Big Boy Pete" speculation among serious '60s historians before the confusion was cleared up.

Miller/Big Boy Pete eventually relocated to San Francisco to work as a producer and engineer, occasionally releasing albums on tiny labels. "Cold Turkey" and (to a lesser extent) "Baby I Got News for You" were reissued on compilations of '60s British psych/mod rarities, and the Damned (under the guise of Naz Nomad & the Nightmares) covered "Cold Turkey." Several albums of unreleased late-'60s Big Boy Pete demos have been issued. 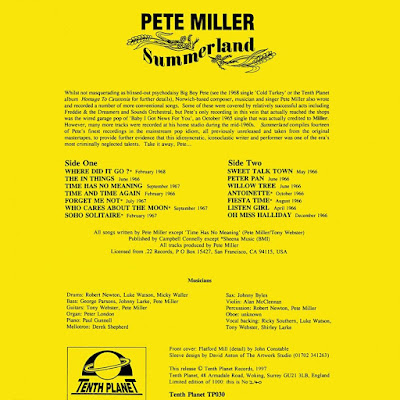 Summerland has the same eerily compressed production values featured on the brilliant psychedelic work of Pete Miller, his vocals slathered in echo and almost crawling out from beneath the music. But whereas that vocal effect worked to perfection on his trippiest work, in the more conventional pop-demo setting of Summerland, it instead exposes his limitations as a singer, perhaps the only reason he never became a well-known figure in the Brit-pop world of the '60s. That is quibbling, to say the least, because his vocals, while not rangy, are still full of warmth and alluring mystery. But otherwise, there is no logical explanation for such a criminal oversight in the annals of rock & roll. Miller was an astoundingly unique songwriter -- possibly one of the most weirdly idiosyncratic from the era -- and that is plenty evident even on the more "commercially" oriented material collected on this reissue. All the songs were written and recorded between February 1966 and February 1968, the same stretch during which he was also virtually inventing (or at least helping to invent) oddball British psychedelia, and the music strongly reflects that sonic influence. So as usual, even his mainstream-targeted music is not exactly flying straight. Summerland, however, like most of his other work, squarely hits the bull's-eye. Miller runs through galloping psychedelia ("Where Did It Go?," with its freakish guitar solos), angst-filled pop ballads, lurching rock, even proto-country-rock lopes on "Forget Me Not" and "Sweet Talk Town," as well as the expected British invasion beat music influences on the excellent "Oh Miss Halliday," with each song spotlighting his extensive melodic skill. The amazing thing about the music (besides its diversity), though, is that it doesn't really sound like any music that came before or after it, and it is not at all beholden to the main influences of its era. If not as readily accessible to the public, Miller was every bit as individual in his way as the Beatles or Bob Dylan were in theirs, which is saying something indeed. Some of these songs are touched by a far-out mysticism, but generally, he penned a set of lyrics that were much more grounded in early romance, particularly of the teenage variety, and are far more straightforward than his trippy, Edward Lear-by-way-of-Joe Meek opuses. And Summerland isn't as consistently exceptional as his psychedelic collections -- maybe partly because one expects glorious eccentricity from Miller -- but it often reaches significant highs that make his neglected reputation all the more tragic.