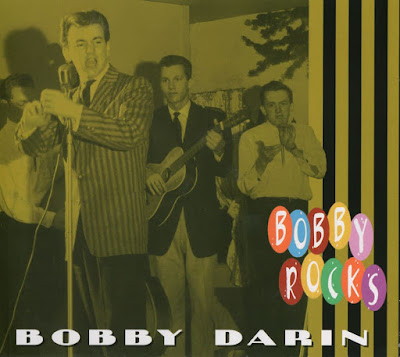 Review by John Bush
Although he's hardly the natural choice for a volume dedicated strictly to rock & roll waxings, Bobby Darin nonetheless holds up surprisingly well when his early career is separated from his supper-club peak and his folk-rocking later career. Bobby Rocks, one in an excellent series from Bear Family (which includes volumes on artists ranging from Jerry Lee Lewis to Sonny James), focuses on the late '50s and early '60s. During these years, Darin was first a struggling songwriter and Brill Building hang-about, then, later, a brief one-hit wonder when "Splish Splash" became yet another of the rock novelties that convinced all adults within earshot that music had hit a new low. His recording career had a rocky start, however, when during 1956 he briefly recorded for Decca. All that changed once Darin signed to Atco the following year and began recording with its famed triumvirate -- Ahmet Ertegun, Jerry Wexler, and Tom Dowd -- and magic inevitably began to happen. Darin proved himself not just an agile songwriter with an eye on the charts, but also an energetic R&B singer. (His love of Ray Charles made him one of the hippest white pop singers in New York.) That Brill Building pedigree may have also resulted in an inordinate number of takeoffs on R&B hits of the day, but Darin's new songs were quite good -- and far from the usual method of undercutting the originals as other pop singers had. "Splish Splash" is naturally still one of the most smoking novelty hits of its day, and his "Mighty Mighty Man" is a revelation, rivaling the Southern blue-eyed soul then being produced by Elvis Presley and Charlie Rich. Bobby Rocks may focus strictly on a short period when Darin was known for one novelty hit, but it reveals that Darin was an artist even before he put on his suit and started hitting the supper clubs. 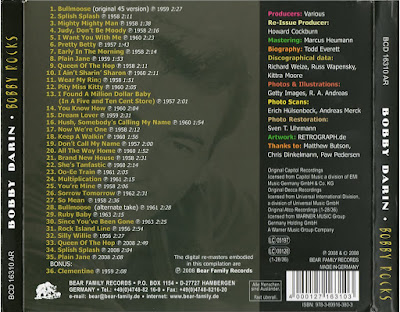