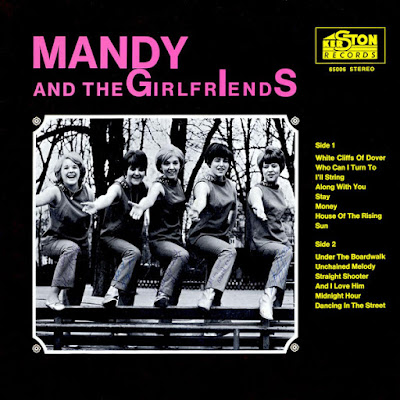 The focus on the pop scene may have been Liverpool and London in the 1960s, but Hull spawned a girl group with an international following.

Hilary Morgan and Margaret Wedgner were two members of the 1960's group, Mandy and the Girlfriends who came into the Late Show to tell of their days touring and performing with the group from Hull. The line-up wasn't consistent throughout the group's life, but Margaret who was on bass and vocals and Hilary (the only non-singer in the group) who played drums, were at the group's core. Other members of the group were Karen Baker, Lynda Harrison, Lesley Saxil-Neilson and Merle Prior. 'Mandy' Smith was a vocalist who worked with a number of local groups.

As teenagers, the group came together with the full support of their parents and set out entertaining the crowds in clubs principally around the city of Hull but also they travelled further afield. They were chaperoned by a Mrs. Smith who looked after the girls, helping them in their endeavours. Margaret and Hilary talk with deep affection about the times they had, including playing with The Animals. Margaret in a project after the Girlfriends, also recalls playing at the same venue as The Who in Hull.
60s Female Group 352

The all-female line-up attracted a great deal of attention, none more so than when they toured US airbases in Germany in the mid-1960's. Going on the German tour was a big decision. The group gave up the chance of appearing on the TV show, Opportunity Knocks, which at the time had an audience of millions. They'd passed the audition stage in Hull but took the decision to work abroad. Hilary says that for her, playing in the band was all that mattered and loved the thrill of playing before a large crowd.
Woman playing drums 200

The attention they received from the US troops was rapturous. It was the time of the Vietnam war and a lot of troops passed through the three bases the girls toured. It was a gruelling schedule, they spent a year at the bases, interspersed with breaks which brought them back to Britain for a month's leave. Hilary had a 'souvenir' from the German tour, she became a GI bride.

During their German tour they recorded an album of songs, but had also recorded in this country notably with Keith Herd of the Fairview Studios. Margaret recalls recording 12 songs in a four hour period in a room with walls covered with egg boxes to help insulate the room and provide the correct acoustic. Songs were recorded in one session and not 'multi-tracked' where instruments are recorded separately and then mixed together to form one song.

Margaret and Hilary speak at length about the formation of the group, performing, recording, life in Germany and very importantly the clothes. They also lament the loss of the venues where live bands can play. They say that since the smoking ban in public places came into force they've noticed a big decline in audiences at events they've attended in recent times. 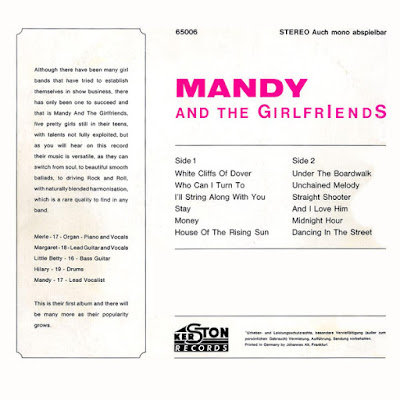 One of the rarest german longplayer from label Kerston.

tags Mandy And The Girlfriends ‎