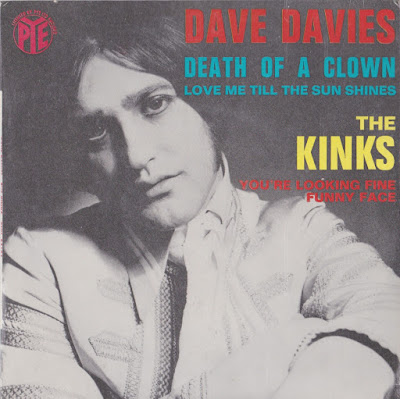 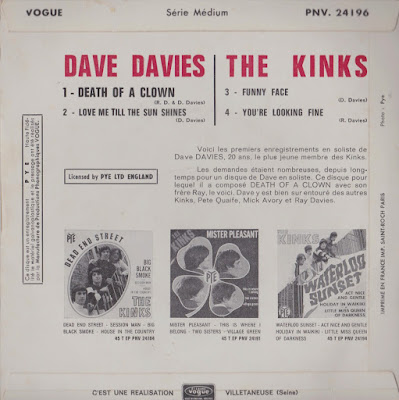 In 2003, Davies was ranked 91st in Rolling Stone Magazine's list of the "100 Greatest Guitarists of All Time"

David Russell Gordon Davies was born at 6 Denmark Terrace, Muswell Hill, North London. He was born the last of eight children, including six elder sisters and an elder brother, later bandmate Ray. As children, the Davies brothers were immersed in a world of different musical styles, from the music hall of their parents' generation, to the jazz and early rock n' roll that their older sisters listened to. The siblings developed a rivalry early on, with both brothers competing for their parents' and sisters' attention.

Davies grew up playing skiffle, but soon bought an electric guitar and started experimenting with rock. The Davies brothers and friend Pete Quaife jammed together in the front room of their house. Activities in the Davies household centred around this front room, culminating in large parties, where the parents would sing and play piano together. The front room and these parties were musically nurturing to the Davies brothers, later influencing the Kinks' interpretations of the traditional British music hall style. Dave and his brother worked out the famous two-chord riff of their 1964 hit "You Really Got Me" on the piano in the front room.

Davies founded the Kinks with Pete Quaife in 1963. His brother Ray, who became the best-known member and de facto leader of the band, joined soon after. The quartet was formed when drummer Mick Avory joined. Dave Davies had a turbulent relationship with Avory, one of the reasons behind the latter's departure from the band in the mid-1980s, although the two had been housemates together in the mid-1960s.

Ray and Dave Davies remained the only two steady members of the band (with the exception of Avory until his departure) throughout their run together. They were accompanied by an oft-changing roster of bassists and keyboardists. Davies played a largely subordinate role to his brother, often staying behind the scenes. Davies would make occasional contributions on Kinks records as lead vocalist and songwriter, with classics such as "Party Line" (the lyrics were written by Ray Davies and the song has been attributed to Ray on many editions of "Face to Face"), "Death of a Clown" and "Strangers".

Dave Davies & The Kinks (Dutch TV, 1967)
Davies was solely responsible for the signature distorted power chord sound on the Kinks' first hit, "You Really Got Me". He achieved the sound by using a razor blade to slit the speaker cone on his Elpico amplifier, which he then ran through a larger Vox as a "pre-amp". This sound was one of the first mainstream appearances of guitar distortion, which was to have a major influence on many later musicians, especially in heavy metal and punk rock.

"You Really Got Me" was the band's third released single, after two previous recordings that failed to chart. They had a three-single contract with Pye Records, and needed a hit to get another. Pye didn't like the song and refused to pay for studio time. The band arranged other financial support to cut the single, which became a hit, topping the charts in the UK and reaching number 7 in the US.

The Kinks released three albums and several EPs in the next two years. They also performed and toured relentlessly, headlining package tours with the likes of The Yardbirds and The Mickey Finn, which caused tension within the band. Some legendary on-stage fights erupted during this time as well. The most notorious incident was at the Capitol Theatre, Cardiff, Wales, in May 1965, involving drummer Mick Avory and Dave Davies. The fight broke out during the second number of the set, "Beautiful Delilah". It culminated with Davies insulting Avory and kicking over his drum set after finishing the first song, "You Really Got Me". Avory responded by knocking down Davies with his hi-hat stand, rendering him unconscious. He then fled from the scene, and Davies was taken to Cardiff Royal Infirmary, where he received 16 stitches to the head. Avory later claimed that it was part of a new act in which the band members would hurl their instruments at each other.

During the late 1960s the group steadily evolved, as Ray's songwriting skills developed and he began to lead the group in a whole new direction. The group abandoned the traditional R&B/blues sound and adopted a more nostalgic, reflective style of music, as showcased on songs like "Autumn Almanac" and "Waterloo Sunset", as well as their albums, such as Something Else by the Kinks and The Village Green Preservation Society.

In July 1967, Davies released his first solo single, credited entirely under his name, (although co-written by his brother) entitled ‘’Death of a Clown’’. In the past, as a member of the Kinks, Dave Davies had only released his own compositions on B-sides and as part of albums. The Kinks' record label sensed potential sales in a solo release from the overlooked Davies and issued "Death of a Clown" as his debut. Although credited to Davies, it was technically a Kinks recording, as his backing band was the Kinks.

"Death of a Clown" rose to number three on the UK Singles Chart. Wanting to profit from the new buzz suddenly surrounding Davies, a solo LP was slated for release sometime in 1968 or 1969. The follow-up single, "Susannah's Still Alive", was released in November 1967; however, it only reached number 20 on the Melody Maker chart. The release of the solo album was held back, and it was decided to wait and see how another single would fare. As anticipation grew for the release of the new LP, it was nicknamed A Hole in the Sock Of. "Lincoln County" was chosen as Davies's next single, but failed to chart. By the time a fourth single "Hold My Hand" met with the same result, a combination of his own lack of interest in continuing and Pye's decision to stop killed off any hopes of an album.

Eventually, the tracks intended for his first solo album were assembled for a 2011 compilation by Andrew Sandoval entitled Hidden Treasures. It combined the singles, B-sides that were released for various Kinks singles and a handful of album tracks that Davies had recorded for Kinks albums. Three tracks included on Hidden Treasures had never been released before until this compilation "Do You Wish To Be a Man", "Crying" and "Are You Ready". Many of these tracks had been assembled previously for The Album That Never Was, released in 1987, but this album primarily consisted of the released singles and B-sides that Davies recorded and released from 1967 to 1969.

The Kinks Are the Village Green Preservation Society and Arthur were released in 1968 and 1969, respectively. Although they received unanimous acclaim, Village Green failed to chart internationally, and Arthur was met with a mediocre commercial reception. These records, although praised by critics and the rock press, were commercial failures.