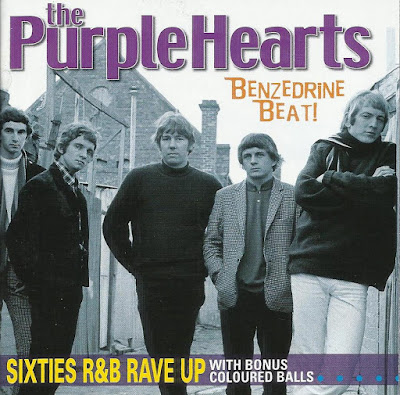 From the producers of the awesome Missing Links CD reissue comes... The complete Purple Hearts on CD. Including all Sunshine label tracks from master tape and 4 early recordings reissued for the first time. As a bonus the CD also contains 7 unreleased tracks from 1964-70 by the original Colored Balls, featuring Mick Hadley and Bob Dames from the Hearts. High energy R&B all the way! 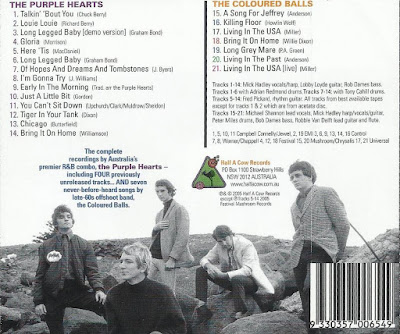 Review by Richie Unterberger
All ten songs the Purple Hearts released during their brief lifetime (on 1965-1967 singles) are on this meticulously thorough reissue. It also adds four songs they recorded on acetates in early 1965 prior to their recording deal, as well as seven tracks by the Coloured Balls, the band in which singer/harmonica player Mick Hadley and bassist Bob Dames played in the late '60s and early '70s. The Purple Hearts tracks are the ones the collectors who seek this CD out will be most interested in, as they're solid, punky R&B, very much in the mold of the British bands springing up in the wake of the Rolling Stones circa 1964-1965. The cuts are tough and hard-boiled, and will no doubt recall similar, though superior, British acts such as the Pretty Things and the Graham Bond Organisation. What makes the Purple Hearts inferior to such acts is that they recorded absolutely no original material, devoting most of their studio performances to covers of songs by the likes of Bond, Paul Butterfield, Bo Diddley, and Muddy Waters. They do, however, pull off a superbly menacing R&B/punk makeover of the spiritual "Early in the Morning," with searing fuzz guitar and voodoo-ish ensemble chanting. Too, their sole 45 to feature cover tunes that weren't well known ("Of Hopes and Dreams and Tombstones"/"I'm Gonna Try") is pretty respectable, though Mick Hadley's vocals aren't quite up to the level of belters like the Pretty Things' Phil May. The Coloured Balls tracks (in quite variable sound quality), which are much more in a hard rock/blues-rock/psychedelic/progressive rock vein, are apparently taken from "rehearsals, gigs and local TV appearances" -- the liner notes aren't wholly clear on this point. These songs aren't nearly as interesting as the Purple Hearts' material, and are likewise all covers, this time around of songs by Jethro Tull, Steve Miller, and Fleetwood Mac, as well as blues tunes by Howlin' Wolf and Willie Dixon. The 36-page booklet is exemplary, with liner notes featuring vintage photos and first-hand quotes from original bandmembers, properly honoring the Purple Hearts' status as one of the more notable Australian rock acts of the '60s.