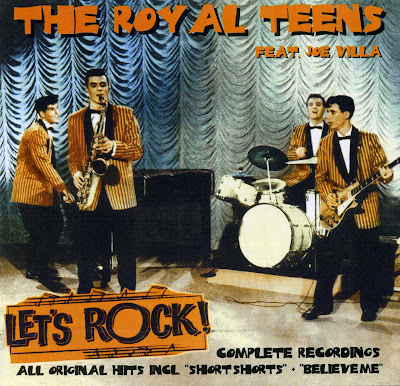 The Royal Teens were a New Jersey rock and roll band that formed in 1956, consisting of Bob Gaudio on piano, Tom Austin on drums, Billy Dalton on guitar, and Billy Crandall on saxophone. They are best known for their single "Short Shorts", which was a #3 hit in the United States in 1958. The follow-up single, 1959's "Believe Me", hit #26. They never recorded an album, and broke up in 1965. The term "Short Shorts" was a description Bob Gaudio and Tom Austin had given to the cutoff jeans teenage girls were wearing during the summer of 1957. On that musically fateful afternoon, Gaudio and Austin were driving up Washington Avenue in Bergenfield, New Jersey in Tom Austin's red and white 1957 Ford Fairlane 500, trying to figure out what to call the latest song they had written for their Rock and Roll band then known as The Royals. ... 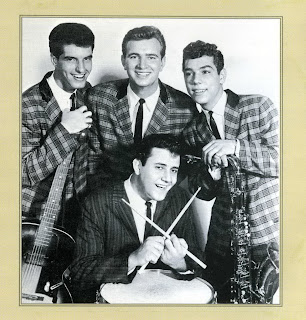 Bob Gaudio (Piano): The youngest member of The Royal Teens, Bob Gaudio, began playing piano at age eight. Like most kids, Bob hated to practice, but soon found that the piano presented enough of an interesting challenge and he soon looked forward to his sessions with the keyboard. Throughout his time performing with the group, Bob studied piano privately under the tutelage of famed Sal Mosca. He co-wrote The Royal Teens’ Number Three hit “Short Shorts” with bandmate Tom Austin. Following his success with The Royal Teens, Bob became an original member of The Four Seasons.

Larry Qualiano (Saxophone): A gifted musician to the extreme, Larry Qualiano held an important berth with the Royal Teens with his amazing versatility: Larry played the tenor, alto and baritone saxophone(s), “legitimate” clarinet and the flute.
Bill Dalton (Guitar): Beginning formal music studies in his early teens, Bill was attracted to the guitar from watching countless cowboy movies. Discovering his grandfather’s old guitar in the cellar of his home, Bill put the dilapidated instrument into playing condition and found that he could strum away to his heart’s content. Besides the guitar, Bill also performed on the bass whenever necessary.

Tom Austin (Drums): Tom’s entry into the music world began as a boy when his uncle, a professional drummer, once left his traps and equipment at the Austin house, and the Tom began playing. He was eventually offered a job to play with a small combo at a local (New Jersey) Police Athletic League (PAL) affair. That started his professional ball rolling, and Tom continued to play with various groups throughout his high school career—while studying under Irwin “Russ” Russo. As a member of The Royal Teens, Tom co-wrote the group’s big hit “Short Shorts” with bandmate Bob Gaudio. 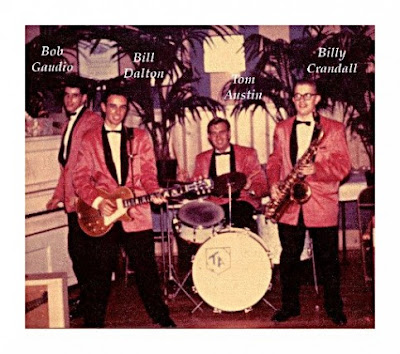 The Royal Teens are, by one definition, a hard-luck band. They could play hard and loud, but they also sang well and knew how to harmonize. They were one of the better rock & roll bands of their period, nicely self-contained and with a great beat and hard attack on their instruments, which included sax, electric guitar, and piano. But for all of that, they're virtually a one-hit group, and that one hit, "Short Shorts," isn't too representative of their sound. And, yet, without it, it's unlikely that a version of The Royal Teens would still get gigs in the Northeast in the summer of 1999, 40 years after the group's last decent chart placement.
Bill Crandle, Bill Dalton, Tom Austin, and Bob Gaudio formed the original band, then known as the Royal Tones, in Fort Lee, NJ in 1957. Crandall left the band and was replaced on sax by Larry Qualiano, and in 1958, Joe Francovilla (aka Joey Villa) joined the lineup as singer. A name change followed to The Royal Teens, when they got a shot at recording on the tiny Power Records label. Their first two singles, "Sitting with My Baby" and "Mad Gas," didn't chart, and they were in the process of cutting a couple of new singles in 1958 when their producer, against the wishes of the band, decided to use some leftover studio time to cut an instrumental jam that they'd done on-stage, to which they'd improvised some words. So the story goes, a couple of girls hanging around the studio were brought in and told to repeat the same line at the designated spots in the song, as the band sang and played.
Out of that session, "Short Shorts" was born, which, after initial success in New York City, Power quickly sold to the ABC-Paramount label. With help from American Bandstand and lots of radio stations that jumped on the song, "Short Shorts" spread quickly over the airwaves, and the band suddenly had a number three national hit. The record, often perceived as one of the dumbest of novelty tunes, is actually better than most people remember it, and has everything a great rock & roll song needs to transcend its simplicity -- the sax part is thick with places for the soloist to have fun, there's a hot guitar break, and the beat is relentless and intoxicating, especially as punctuated by the honking sax, a song you can laugh at, dance to, and play variations on for five minutes or more. (If Lenny & the Squigtones had really wanted to generate a hit in the late '70s, they'd have cut "Short Shorts" with Penny Marshall and Cindy Williams, or their soundalikes, backing Michael McKean and David Lander).
Unfortunately, The Royal Teens were never able to follow it up with anything remotely as popular. "Harvey's Got a Girl Friend" charted very low, and "My Kind of Dream" stiffed, after which the group left ABC-Paramount. A short stay on the Mighty Records label, and a similar lack of success, brought them to Capitol, where they made the Top 30 in 1959 with the romantic, doo wop style number "Believe Me." That was their last chart record, however, and also the last record on which Bob Gaudio played -- he exited The Royal Teens and soon hooked up with a singer named Frankie Valli, together forming the Four Lovers, soon to become the Four Seasons.
The Royal Teens spent the next few years bouncing between labels, including Jubilee, Blue Jay, and Swan, and still appeared on shows like American Bandstand occasionally, even as their membership slowly shifted. Al Kooper spent much of 1959 playing guitar with The Royal Teens before moving on to much bigger things. They still cut good sides, and they were even adaptable to the doo wop vocal sound; in fact, as "Believe Me" (which sounds more like Dion & The Belmonts than Dion & The Belmonts did) proves, they were better at it than a lot of bands, and they still came up with great riffs and bracing solos (check out the guitar break on "All Right Baby"). But not even follow-ups like "Little Trixie," patterned after "Short Shorts," or pure exploitation like "Short Shorts Twist," could crack the charts for them again.
The group has continued in some form into the '90s, however, partly with help from the use of "Short Shorts" in a commercial for Nair, and the original record's continued popularity on oldies radio and in compilations. Those who've heard their other records, however, also know that this band had a lot more to offer, and may still. 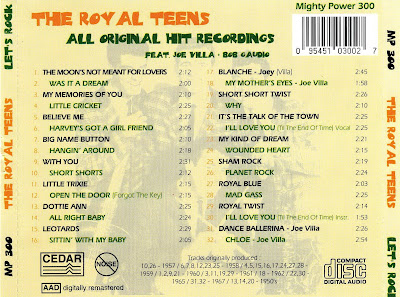