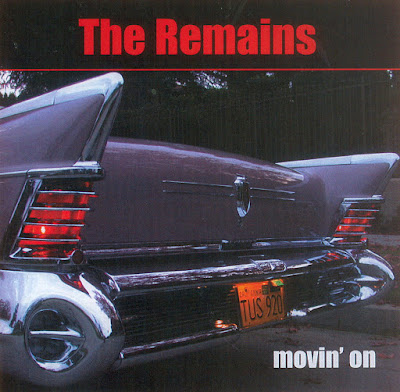 Review by Joe Viglione
As authentic a dozen tunes any fan of the Remains could hope for find a niche in the digital grooves of Movin' On, Barry Tashian's distinctive voice picking up where he left off on the group's last full album, which was, ah...1966? Almost 40 years in between releases sure beats the two years it took Sly Stone to get a new disc out during his heyday! But it's worth the wait as Vern Miller, Bill Briggs, Chip Damiani, and Tashian deliver the goods. "You Never Told Me" and "Over You" could easily slip into the Eagles' repertoire, which is the dilemma for hardcore Remains fans who always wanted their heroes to sustain that launch that culminated in a tour with the Beatles and Bobby Hebb. And God knows the Eagles needed some real competition. "A Man's Best Friend Is His Automobile" showed up on Barry & Holly Tashian's 2002 release At Home and gets the Remains treatment here. Holly Tashian contributes backing vocals to the album, the group also augmented by Daniel Tashian on vocals, percussion, and B-3 as well as Angelo on backing vocals, percussion, and a co-write on "Don't Tell Me the Truth." Speaking of which, for those who loved "Don't Look Back," the 45 rpm that ended up on the original Nuggets before getting tagged onto the first Remains disc, opening track "Don't Tell Me the Truth" will satisfy their needs. "Listen to Me" is lots of fun as is the album closer, "Time Keeps Movin' On," resplendent in sounds toward the end of the tune that would make Lothar & the Hand People proud, but the standout and potential hit is "Hard to Find (So Easy to Lose)." "The Power of Love" and "Ramona" both add to the legend, but it's "Hard to Love" that could open up this band to a larger and well-deserved audience. As the Zombies tour, sometimes with Pete Best's collection of early Beatles music, the addition of Barry & the Remains would make a potent trio of artists from an era whose popularity will remain perpetual. TheRemains.com is how to find this music if you can't locate it in the usual places. 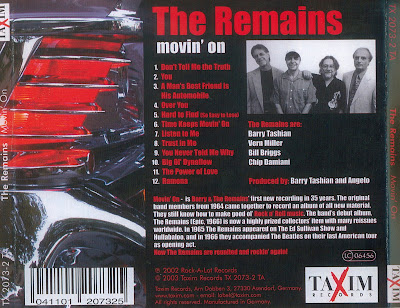 " The first album in 35 years for one of the finest overlooked American bands of the mid-'60s, featuring the original line-up. The original band members from 1964 came together to record an album of all new material. The Remains reunited and rockin' again!! "