Tony Burrows & The Hit Squad ‎– All The Hits Plus More 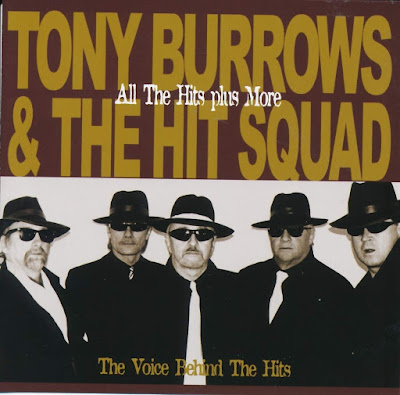 Biography by Richie Unterberger
By rights, Tony Burrows should be a one-man oldies package tour -- though he never charted a record under his own name, he holds the unusual honor (you can look it up in The Guinness Book of World Records) of having four records in the British Top Ten at once, all under different names. The British session vocalist sang Edison Lighthouse's "Love Grows (Where My Rosemary Goes)," White Plains' "My Baby Loves Lovin'," the Pipkins' ridiculous "Gimme Dat Ding," and the Brotherhood of Man's "United We Stand," all of which were big hits in both the U.S. and U.K. in 1970. With his high range and pleasantly anonymous yet versatile pipes, Burrows was an ideal tool for songwriters looking to craft bubblegum or light pop/rock for the AM airwaves -- they were looking for hit songs, not for hit artists, and what did it matter to most consumers that the "groups" didn't really exist?

He started out in music as a teenager in the mid-'50s, amid the skiffle boom in England, and turned professional in 1960. Burrows' first group, the Kestrels, dated back to the days of skiffle and had been formed with three school friends, future songwriter/producer Roger Greenaway, Roger Maggs, and, a little later, Jeff Williams -- they stayed together even in the army (which they all joined at the same time) and became a quintet in 1963 with the addition of Roger Cook. The Kestrels were a harmony vocal group, and lasted until 1965 amid the burgeoning high-wattage sound of Merseybeat before calling it quits -- that same year, Burrows got to cut his first LP, except that even then he didn't use his own name, issuing it under the stage name "Tony Bond" amid the craze surrounding the Ian Fleming-spawned secret agent James Bond and the movies starring Sean Connery. 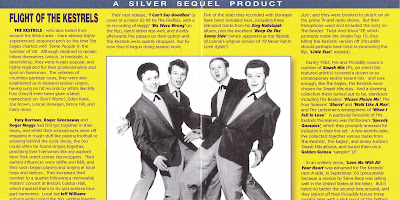 That gimmick having failed, Burrows joined a somewhat more successful vocal group of the period, the Ivy League. He remained with them for two years, during which time they evolved in a new musical direction and took on a new name, the Flower Pot Men -- but by 1969, that name seemed old hat and the group was rechristened White Plains. Their first record under that name to be released was a Cook/Greenaway composition called "My Baby Loves Lovin'," which rose to an astonishing number 13 in the United States and number four in England. He subsequently re-teamed with his former bandmate Greenaway and producer John Burgess to sing lead on "Gimme Dat Ding," credited to the Pipkins -- a joke of a record, written for a children's album, it made the Top Ten on both sides of the Atlantic.

By this time, a certain pattern was developing in Burrows' work and career -- again with Roger Greenaway on hand singing, he joined the Brotherhood of Man for a series of sessions that yielded the transatlantic hit "United We Stand." And then it was on to producer/composer Tony Macaulay, of Foundations fame, for "Love Grows (Where My Rosemary Goes)" -- he was originally supposed to sing backup but as the session took shape, he ended up singing lead and tried to get the record out with his name on it; instead, it was credited to something called Edison Lighthouse, and the only time that Burrows was seen with the group that was put together around the name was in television appearances. That record was another hit, and gave Burrows an extended chart-run hat trick that availed him relatively little.

Madman Across the WaterHe kept busy throughout the 1970s, however, trying to make lightning strike again -- perhaps this time in a way that would benefit him in a more public manner. But the best he could muster was a Top Ten entry in 1974, in collaboration with his old White Plains associate John Carter, with his lead on the Beach Boys homage record "Beach Baby," credited to the First Class. Additionally, he sang background on many of Elton John's early-'70s albums (especially Madman Across the Water). During the later '70s, Burrows worked under various group names, in association with Chris Arnold, David Martin, and Geoff Morrow, including Domino, Touch, Magic, Original Cast, and West End, as well as his own, without any chart success.
He later moved into writing and producing commercials, and in the 1990s also appeared in Germany as part of a revived/updated version of the Flower Pot Men. But with all of those chart singles around him, there's always the possibility that someone -- at least in England -- will come up with the right mail/Internet-order package and the right infomercial to build a hits collection at long last around Tony Burrows' name; from the Kestrels to the First Class and perhaps up as far as West End, the man is practically a living piece of pop/rock song history, with a career's worth of hit tunes associated with his voice, if not his name. 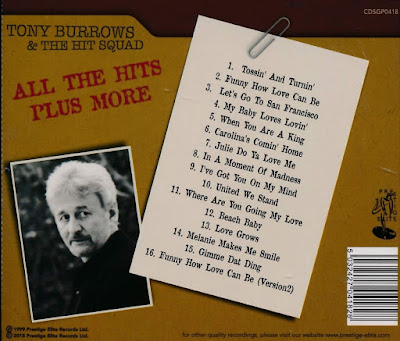 My biggest claim to fame is that I m an answer in Trivial Pursuit so says Tony Burrows, who has spent the last 20 years of his career putting his voice to good use on TV commercials. Following his departure from his first group, The Kestrels, who had toured with the likes of Helen Shapiro and Eden Kane, Tony, found himself in demand as a session singer. Chart success followed chart success, singing lead vocals on records by The Ivy League, The Flowerpot Men, Brotherhood of Man, White Plains, Edison Lighthouse, The Pipkins and First Class. But it was when Tony fronted no less than 3 different bands on the same edition of Top of the Pops that really put his name on the pop music map. The bands and songs were Love Grows , a No.1 for Edison Lighthouse, My Baby Loves Lovin and the first Brotherhood Of Man hit United We Stand . Given his remarkable track record, it s surprising that Tony never had a hit under his own name! Tony Burrows was the voice behind the following hits, all of which appear on this album