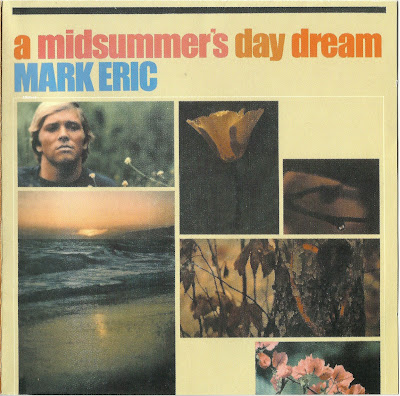 "So this one sounds so hokey that it could be the plot to one of those Hallmark television specials.  Born and raised in Los Angeles, Mark Eric Malmborg was  the stereotyped Southern California teenager - blond, tanned, good looking, great teeth, complete with a love of surfing and music.  As a teenager he began shopping songs around to major labels, eventually attracting the attention of local radio station engineer Bob Raucher.  Raucher helped Eric record material at Hollywood's Gold Star studios. Under the name Mark Eric he also enjoyed modest successes as a songwriter.  In 1968 though efforts caught the attention of Warner Brothers executive Russ Regan.  Regan eventually signed Eric to MCA subsidiary Uni's newly formed R&B imprint Revue.
Produced by Norman Ratner, 1969's "A Midsummer's Day Dream" is probably the best Brian Wilson and the Beach Boys album they never released.  Now, if you weren't a Beach Boys fan that description didn't do much for you.  On the other hand, anyone who was an admirer of Brian Wilson's catalog would find this set to be a 'must own' addition to their collection.  That also neatly captured the strengths and weaknesses of this release.  If you were looking for originality, there wasn't much to be found here.  None of the dozen selections reflected a unique Mark Eric 'sound'.  What you did get was someone who managed to nail that unique mid-1960s Southern California vibe that mixed Beach Boys and sunshine pop.  Interestingly, Eric and his collaborator/arranger former Animals guitarist Vic Briggs apparently wrote these twelve tracks intending to place them with other acts.  The sessions were apparently only intended to demo the material, but the results were so impressive that Revue decided to release it as a Marc Eric effort.

Kicked along by Eric's best Brian Wilson impersonation, 'California Home' was a perfect way to open the album.  Built on a great melody that managed to couple Beach Boy-styled harmonies with a lysergic tinge it made for one of the best California odes you'll ever hear.  Easy to see why it was picked as a single.

Yeah, it may have been recorded in 1969, but 'Move with the Dawn' sure sounded like Beach Boys circa 1966-67.  Sporting some tasty horn charts, this one wasn't quite as commercial, but again served to showcase Eric's likeable voice.

Opening up with some Free Design-styled harmony vocals, 'Laura's Changing' was a bit high for Eric's voice (you could hear him straining on the higher notes), but the bouncy melody was strong enough to make you overlook that flaw.  By all intents and purposes the lyric about growing into adolescence should have rendered this into a hopelessly sappy mess, but Mark's managed to make his point without turning it into a disaster.

The album's creative and commercial high point, 'Where Do The Girls of the Summer Go' perfectly captured that end-of-summer sadness you felt as a teenager.  Gorgeous melody and amazing multi-tracked vocals that would have made Brian Wilson jealous ...

The most surf band-ish effort, 'I'd Like To Talk To You' sounded like a mid-1960s Beach Boy outtake.  Nice, straightforward rocker that had a killer hook in the title track refrain.  Grows on you more and more.

Eric's Beach Boys fixation was never more apparent than on the stunning ballad 'Take Me with You'.  Right down to the fragile backing vocals and the eclectic orchestration (vibraphone?), this one sounded like a lost Brian Wilson original.

Side two opened with one of Eric's more rock oriented numbers.  Mind you, nobody was going to mistake '' for a Black Sabbath song, but within the sunshine pop genre this one actually generated some steam.  The song was also interesting in that the midsection borrowed more than a little bit of the melody from Barrett Strong's 'Money'.  Eric's lucky he didn't get slapped with a copyright suit.  One of the album highlights.

'The ballad 'Don't Cry Over Me' was the first disappointment.  Pretty, but inconsequential.   The multi-tracked harmony vocals were the best part of the song.

With Eric taking a stab at explaining the 'generation gap', 'We Live So Fast' was my favorite song.  Yeah, the lyrics were hysterical ('now that we've had our say it might be a better day') but you couldn't help but smile at the sentiments.

The album's prettiest song, 'Sad Is The Way That I Feel' was a dreamy ballad with some totally downbeat lyrics that again sounded like a "Pet Sounds" era Beach Boys performance.

With a Motown-ish melody and rhythm, the mid-tempo rocker 'Just Passing By' was the album's most commercial track.  Had it been released in 1966 it would have gone top-40.  Great song with a hook you won't be able to shake.

The album closed with another beautiful Brian Wilson 'Caroline, No'-styled ballad - 'Lynn's Baby'.  With a lyric focusing on an unwed pregnant teenager, lyrically this one was actually more interesting (and for the time certainly controversial) than 'Sad Is The Way That I Feel'.

Musically the album was already several years out of step with popular tastes so it shouldn't have been a surprise to see the parent LP and singles vanish directly into cutout bins.  Sadly that effectively ended Eric's recording career, though he actually recorded some material for a projected sophomore set.  Those tracks were shelved and only saw the light of day when appended to a 2002 Rev-ola CD reissue of the album (catalog number CR-REV 18).  Eric subsequently turned his time and attention to modeling, commercials and acting, briefly appearing in a number of early-1970s television shows including The Partridge Family and Hawaii 5-0.
So it turns out that Eric is still active in music, though his current career appears to be playing on cruise ships..."

"Brian Wilson or someone close to him must have known something about DNA that no one else did in the late 1960's, because he evidently had a clone.

Clone is not a pejorative when talking about Midsummer's Day Dream, this Marc Eric album. Simply put, if you like Wilson at his pre-Pet Sounds, apex Summer Days (And Summer Nights!!), you'll have equal love for Eric's album...."

"...I forget where I first encountered the sounds of Mark Eric, but I suspect it was on the interwebs somewhere.
His sole LP, 1969’s ‘A Midsummer’s Daydream’ is a fairly scarce item, mainly because it went nowhere when it was first issued, and because those that have encountered it since have hard filed it.
Mark Eric’s music has been described – accurately – as some of the best Beach Boys material not actually created by Mr Wilson and his henchmen..." 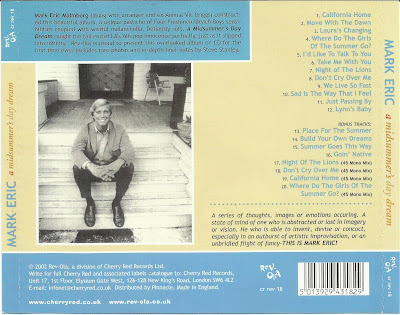