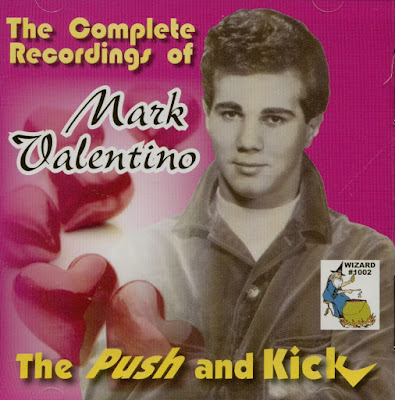 "Where Mark is concerned, he started out in 1962 as Tony Valentino with Swan Records of Philadelphia, cutting Gee b/w Big, Big Woman as Swan 4093 and So Right For Saturday Night b/w Good Time Flo as Swan 4109. None of the sides made any national impact, but that changed with The Push And Kick, a song about a dance style composed by Eddie Rambeau, Frank Slay, Jr. and Bud Rehak. With the Slay orchestra backing and his billing changed to Mark Valentino, it climbed to # 27 in Nov-Dec 1962 as Swan 4121 b/w Walking Alone. 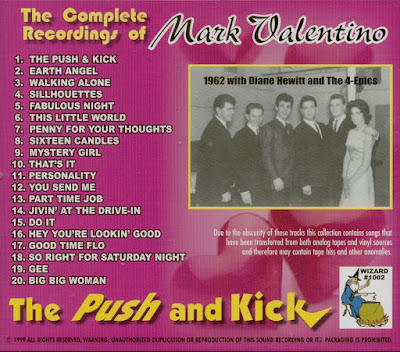 The sound reproduction, while far from perfect, is quite acceptable to those of us who grew up with the snap, crackle and pop of the 78- and then 45-rpm discs, and is described this way on the jewel case: "Due to the obscurity of these tracks this collection contains songs that have been transferred from both analog tapes and vinyl sources and therefore may contain tape hiss and other anomalies." Just don't expect anything in the way of liner notes or discography.

Valentino left the music scene not long after his last release and became a Philadelphia police officer under his birth name."  ~  George O'Leary