The Fortunes - Here It Comes Again 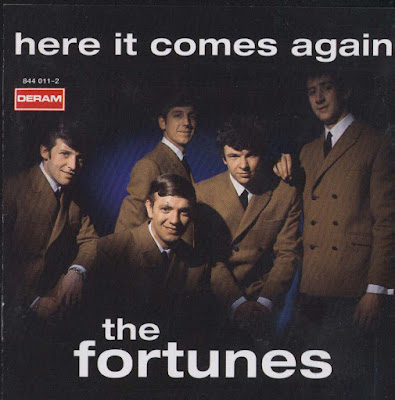 Biography by Steve Huey
A fairly typical British Invasion quintet inspired by the bouncy, harmony-driven sound of Merseybeat, the Fortunes are probably best-known in the U.S. for their oldies-radio staple "You've Got Your Troubles." Formed in Birmingham, England, in 1963 as the Cliftones, the group was originally a vocal trio consisting of Rod Allen (bass, lead vocals), Glen Dale (guitar, vocals), and Barry Pritchard (guitar, vocals) (born April 3, 1944). However, with the explosion of the Beatles and the Merseybeat sound, the group quickly rethought its direction, adding keyboardist David Carr and drummer Andy Brown, and changing their name to the Fortunes (though their first single, "Summertime, Summertime," was oddly credited to both groups). The group found its niche crafting melancholy, orchestrated ballads similar to Peter & Gordon, the Moody Blues, or the Zombies (and in fact toured with the former two). Their second single for Decca, "Caroline," was adopted as theme music by the famed U.K. pirate station Radio Caroline upon its release in early 1964, yet never charted despite all the heavy airplay. Two more non-charting singles followed, but the group hit its stride in 1965 with "You've Got Your Troubles," which hit the U.S. Top Ten and went all the way to number two in the U.K. Their self-titled debut album was released that year, and the follow-up single "Here It Comes Again" duplicated its predecessor's success in Britain, though not in the States. "This Golden Ring," the follow-up to "Here It Comes Again," was a decent-sized hit in the U.K. (though it didn't reach the Top Ten), but problems set in after that. Glen Dale left the band in the summer of 1966 seeking a solo career, and was replaced by Scottish guitarist Shel McCrae. Unfortunately for the reconstituted band, psychedelia was becoming the dominant sound of British pop music and the squeaky-clean Fortunes were unable to make the transition. A pair of 1966 singles flopped, and the group lost their contract with Decca the following year. They switched over to United Artists and continued recording singles, paying the bills by singing an American Coca-Cola jingle. David Carr elected to leave the band in summer 1968, which continued undeterred as a four-piece. Surprisingly, the group's 1970 single "That Same Old Feeling" (a cover of a Pickettywitch number) hit the lower reaches of the charts in America. The Fortunes switched labels again, this time to Capitol, where they hooked up with producers/songwriters Roger Greenaway and Roger Cook. The Fortunes staged an unexpected comeback in 1971 with the single "Here Comes That Rainy Day Feeling Again," which hit the U.S. Top 20. The follow-up "Freedom Come, Freedom Go" flopped stateside, but returned the group to the British Top Ten, a feat repeated by its follow-up, "Storm in a Teacup." George McAllister made the Fortunes a quintet once again, but no further singles-chart success was upcoming, and the group eventually contented themselves with simply playing the British club circuit. Rod Allen continues to lead a nostalgia-oriented version of the Fortunes featuring guitarist Michael Smitham, drummer Paul Hooper, and ex-Badfinger keyboardist Bob Jackson. Barry Pritchard passed away on January 11, 1999. 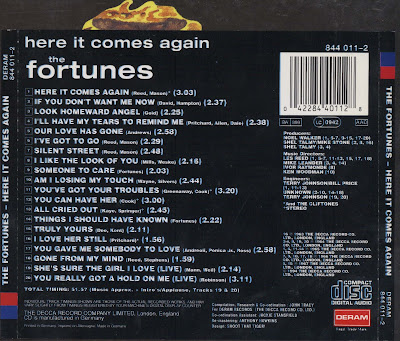