VA - You Heard Them Here First: Rock's Icons Before They Were Famous 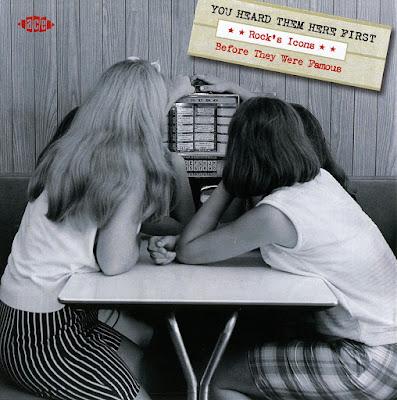 Review by Stephen Thomas Erlewine
Ace's You Heard Them Here First: First Recordings by Famous or Influential Artists is more of an archaeology project than its companion disc, You Heard It Here First! That 2008 compilation featured the first recorded versions of pop, rock, and soul classics that became hits in the hands of other artists, whereas this set unearths the first recordings of superstars, so almost without exception neither the songs nor the names on the back cover of You Heard Them Here First are familiar, but the sounds often are. Some artists are heard in what would later become their familiar settings -- Dan Penn does some wicked Southern soul as Danny Lee on "Stop Calling Me Baby," Gram Parsons' country-rock was fully intact in the International Submarine Band, and the only thing that separates the Byrds from the Beefeaters is their name -- but You Heard Them Here First is at its most fun when it forces listeners to draw their own connections, to hear the incipient glam growl within David Bowie as he's singing "Liza Jane" as Davie Jones or to listen to Lewis Reed's "Your Love" and find Lou Reed testing out vocal phrasing he'd later do during the Velvet Underground's upbeat moments. Although there is a handful of genuinely terrific singles here -- chief among them Neil Young and Rick James in the Mynah Birds kicking out the garage rock "It's My Time," the Band's early incarnation Levon & the Hawks' absolutely terrific "The Stones I Throw," Warren Zevon in Lyme & Cybelle's nifty piece of psychedelic pop "Follow Me," and Joe Cocker's stomping take on the Beatles' "I'll Cry Instead" -- the main pleasure here is hearing great talents finding their voice. Think of it as a graduate class in pop music, one that's illuminating and entertaining, and You Heard Them Here First starts to seem like something pretty close to essential listening even if it doesn't contain many, if any, outright classics. 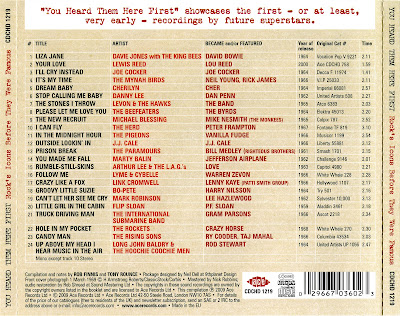