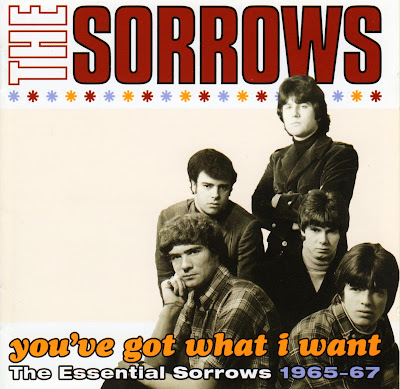 Review by Richie Unterberger
Despite the group's limited commercial success, there have been several Sorrows CD compilations. Why should you get this one, whether you already have Sorrows collections or are looking for the best Sorrows anthology? Well, the 30 tracks do include everything essential from their mid-'60s prime, including both sides of their seven 1965-1967 singles; the stereo version of their 1965 album Take a Heart, which included a couple songs not on those 45s, as well as slightly different, re-recorded versions of some numbers that also appeared on singles, and four outtakes. That in fact totals up to almost everything the Sorrows recorded in the mid-'60s, not merely their best tracks, though it does omit some foreign language versions and outtakes that have appeared on previous compilations. More importantly, however, it has a 16-page booklet that's amply illustrated with vintage photos and clippings, along with a lengthy history of a band that really hasn't been too well documented in other liner notes or vintage rock-oriented magazines. Most importantly of all, much of it's simply terrific music from the tougher side of the British Invasion, though the Sorrows are largely unknown (especially in the U.S.) to this day. Though more pop-oriented than the Pretty Things (whom they most resemble among notable British mid-'60s groups in their fusion of R&B and pop), and possessed of as strong an identity and original innovation as the Pretty Things or the Yardbirds, the Sorrows will nonetheless strongly appeal to fans of such bands. It's true, too, that some of the more marginal B-sides and outtakes here aren't so hot, but there are too many outstanding songs here to list in one sentence, including their one sort-of British hit ("Take a Heart") and their successful progression into psychedelia ("Pink Purple Yellow and Red"). 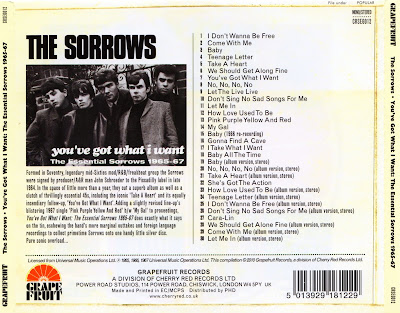 Thanks a lot to Cor.