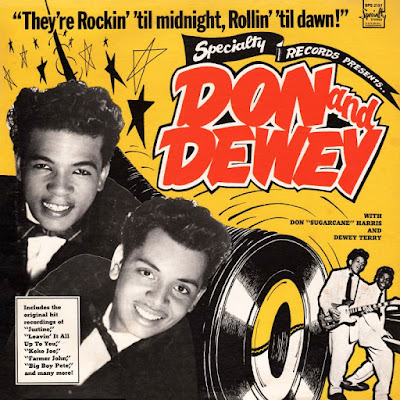 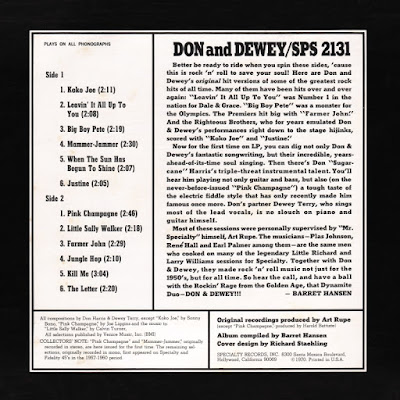 In 1954, Dewey Terry was a founding member of a group called the Squires while still in high school. He was later joined by a friend, Don Bowman (who would later change his name to Harris). In 1955 the Squires released a record on the minor Los Angeles-based label Dig This Record. In 1957 the group broke up, but Don and Dewey remained together.

Later that year they were signed by Art Rupe's Specialty Records label and for the next two years produced rock and roll. Both Don and Dewey played guitar, with Dewey often doubling on keyboards. When not playing guitar or bass, Don occasionally played the electric violin, a skill for which he subsequently became well known under the name of "Sugarcane" Harris. Drummer Earl Palmer played frequently on their sessions.

Although Don and Dewey did not have any hits of their own, several of the songs that they wrote and/or recorded would appear on the charts later, performed by other artists. "I'm Leaving It Up to You" became a #1 hit for Dale & Grace in 1963. "Farmer John" was a hit by The Premiers, reaching #19 in 1964 after having been covered by The Searchers a year earlier. "Koko Joe" (written by the then Specialty Records producer Sonny Bono), "Justine" and "Big Boy Pete" were staples for The Righteous Brothers for many years. "Big Boy Pete" became a minor hit in 1960 for The Olympics, reaching #50 and a #4 hit for The Kingsmen when recorded with new lyrics as "The Jolly Green Giant" in 1965.

In 1959 Don and Dewey and producer Bono left Specialty Records for Rush Records, where they recorded a few songs but split up shortly afterward.

In 1964 Art Rupe recorded both Don and Dewey and Little Richard (another Specialty Records act) but there were to be no further hits for either act. The pair played briefly in Little Richard's band and then went their separate ways once again.

"Don and Dewey" is also an instrumental by the band It's a Beautiful Day. It features on track 1 of their 1970 album Marrying Maiden. The band featured a violin, so this may have been the inspiration to write this piece.

That same year, 1970, Sugar Cane Harris (sic) re-emerged to a wider rock audience, playing violin on the Hot Rats solo album by Frank Zappa, with Captain Beefheart (vocals) on "Willie The Pimp" and on the lengthy instrumental jam, "The Gumbo Variations".[4] and in later years, went on to play on many more solo Zappa, and The Mothers of Invention albums. He had previously featured in the late 1960s, on recordings with Johnny Otis of The Johnny Otis Show, and John Mayall's Bluesbreakers.