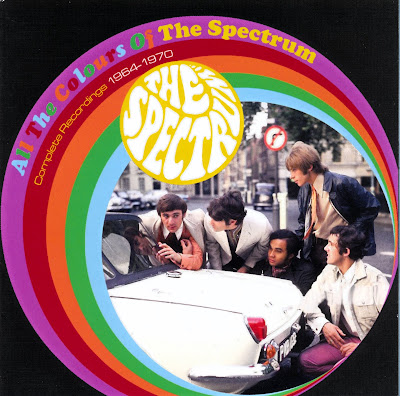 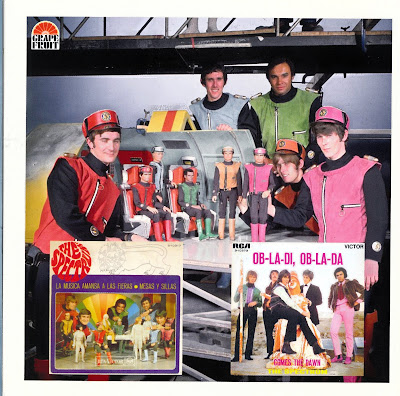 The entire recorded output of the North London band the Spectrum, probably best known for supplying the theme music to the Gerry Anderson puppet Sci-Fi series “Captain Scarlet and the Mysterons”…..Ian Canty attempts to see exactly who was pulling the strings for the band……

The idea of a scripted television show aimed at the teen pop market might seem hackneyed now, but in the 60s it had never been really tried out before, which is why “The Monkees” was such a revelation. Two hotshot American TV producers called Bob Rafelson and Bert Schneider saw the Beatles sweep across the US and noted that the hip energy of their films was ripe to be used in the sitcom format. They held auditions which yield Tork, Dolenz, Nesmith and Jones and the rest is geography, no I mean history. Following on from the success of the TV show their records were million sellers (possibly due to the having the best kind of “product placement” imaginable, but greatly assisted by the fact they were perfectly crafted pop nuggets) and it wasn’t long before others pondered using the same methods.

In fact there have been various attempts over the years to revive “The Monkees” format, with NI New Wave band the Moondogs actually getting as far as having a tea-time show of their own and others mooted for such a project numbered Madness, Supergrass and a whole host of boy bands. Whether any of these ever got past the planning stage is questionable (Madness did make a Ben Elton scripted pilot I seem to recall), but one of the earliest responses to the Prefab Four were the Spectrum who had their own TV tie-in too…..

Like many band who found their niche later on in the decade, the Spectrum story begins at the very start of the 1960s. Early participants included future Rolling Stone rock-solid time-keeper Charlie Watts, but the band settled itself around singer/guitarist Colin Forsey, lead guitarist Tony Atkins and bass player Anthony Judd. They supported the Beatles in 1963 working under the name of Dale Stevens and the Group Five, but generally busied themselves with live work in and around the capital.

Like many Beat groups at the time, their first recording action was a cheapo LP of covers cut for the European market (remember Freakbeaters The Eyes album of Rolling Stones covers?) under the snappier sobriquet Group Five. This platter was a fake “live” effort presumably to cash in on Beatlemania, having similar song selection to a Hamburg-era Moptops set. It is featured in its entirety on disc two here and as you might suppose the versions proffered are spirited but don’t add much to the originals, but it does have a lot of phoney screaming and Colin Forsey’s blues-wailing original “What’s That”, which does pass muster.
After a debut single release with the oddly dated, Doo Wop-tinged “Little Girl” on EMI, they were snapped up by RCA, who through some sort of agreement with Screen Gems (“The Monkees” makers) decided that the time was right to repeat the Monkee modus operandi with a British band. Around this time both Colin’s brother Keith came in on drums and keyboard player Bill Chambers (who along with his successors was responsible for some lovely Hammond runs on the later material here, on the “Samantha’s Mine” single for example) also joined the band.

Though trumpeting the band as the new Monkees the bands didn’t actually have much in common, the Spectrum being a working group in their own right for 7 years before the bigwigs at RCA “discovered” them. Around this time too came possibly the Spectrum’s biggest break, via a link up with the Gerry/Victoria Anderson “supermarionation” tv series “Captain Scarlet and the Mysterons”. Apparently the Andersons heard the group on the radio and seeing they shared names with the security organisation in the show, decided the Spectrum should record a new end theme for the programme as well as having a Monkees’ like tie-in to the show. This resulted in the band having to wear Captain Scarlet outfits (well it was the 60s!), which meant the odd spectacle of the band being filmed messing about Monkees-style on the Portbello Road (the title of their current single at the time), dressed in their puppet uniforms and driving about in a Mini-Moke. The record itself was a sly dig at consumerism that was even then nudging in on the counter-culture, hidden in a stately 60s Pop shell – “when business starts, the friendship ends”.

One thing the Spectrum and the Monkees did share was that they both could have been considered proponents of Bubblegum, which to be fair Dolenz and the boys sort of started. A happy-go-lucky grab-bag of Pop with little in the way of a message apart from overwhelming optimism, in the wrong hands you could have been looking at severe tooth decay as the sugar content was so high. The Monkees were developing all the time into a fine outfit who could side-step the negatives and make pure Pop heaven…..as for the Spectrum? Well they certainly could handle a pretty tune and if for the most part their efforts were good rather than brilliant they did manage a few absolute gems. “London Bridge Is Coming Down” is a perfect example of the form, nursery rhyme lyrics with a twist, an infectious hook and great driving rhythms.
Though the powerful “Jacqueline” moves the band more towards Freakbeat territory with some crunchy fuzz guitar, it’s still as catchy as hell and probably if you were looking for one outstanding example of what the Spectrum did well it would be this one. “Mr Jenkins Brand New Boots” taps into that whimsical late 60s story-telling trend and also allows Colin Forsey’s Anthony Newley/early Bowie vocals to shine. There is the usual hotchpotch of covers and outside written efforts, the methods employed as the rote response of 60s management/record companies desperate to get a hit record, which didn’t serve the Spectrum awfully well in finding their own voice, but did yield some results. Though they never troubled the charts over in the UK, mainland Europe was more responsive, with their version of the Beatles Blue-Beat nonsense “Ob-La-Di, Ob-La-Da” reaching the Top 20 in Germany and Spain. Of course we have their Captain Scarlet theme at the end of disc one, slightly different to the version that Siouxise and the Banshees tried early on in their career (I believe the UK Subs had a go too), but very evocative of 60s TV.

Though they did finally get a chance to put out an album in 1970, the enigmatically titled called “The Light Is Dark Enough” (though they did also have a LP released for some reason only in Venezuela too – both are included here), after many line up changes in 1971 the Spectrum’s ten year run came to an end. Undoubtedly the member of the band who went onto the most success was drummer Keith Forsey: he became a record producer and worked with Disco pioneer Giorgio Moroder. After that he produced Gen X’s excellent “Dancing With Myself” and the parent album “Kiss Me Deadly”, before helming Billy Idol’s years of solo US success in the 80s (which I’m bound to say I can’t thank him that much for, seeing as Generation X were a great band but Billy solo….erm).

Though it’s nice to have the early single and the “live” album from 1964, the best bits are the songs the band recorded towards the end of their tenure. This was when they came up with some winning concoctions which make you forget the larking around dressed as Captain Scarlet, they had a lot to offer with some fine post-Procul Harum ornate Pop music. The best tracks here like “Jacqueline” packed plenty of punch and some neat ideas into a tight 60s pop structure. The Spectrum may have had a lot of outside parties sticking their oar which possibly hindered more than helped, but the crux of the matter is that they were a flexible and intelligent band, with Colin Forsey being a pretty good songwriter when given the opportunity. The definitive document of an obscure 60s outfit for certain, but also one with many charms for the intrigued newcomer.