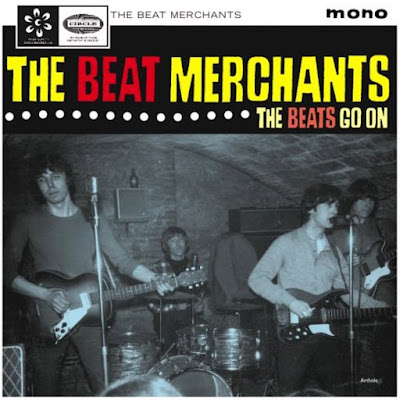 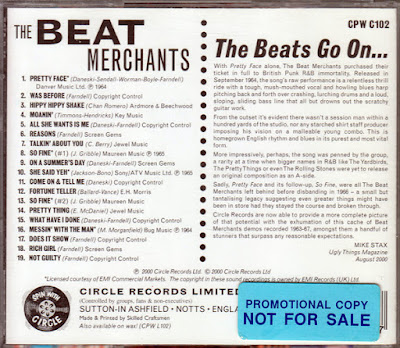 Artist Biography by Bruce Eder
The Beat Merchants were a talented British band of the early '60s who were equally adept at generating mainstream British pop/rock in the manner of the Roulettes and the Searchers or hard-driving bluesy rock & roll in the manner of the Rolling Stones and the Small Faces. Yet apart from their debut single, "Pretty Face" -- which made it to number 44 on the British charts -- they never made any commercial impression on audiences in England or America. They started life as a Shadows-influenced instrumental group from England's south coast called the Hustlers, consisting of guitarist Ralph Worman, bassist Geoff Farndell, rhythm guitarist Gavin Daneski, and drummer Les Rogers (later succeeded by Vic Sendall). In 1963, the group added Peter Toal as a singer, which allowed the band to expand its repertoire and appeal. Billed as Peter & the Hustlers, the group began building a serious audience at its concerts, which featured upbeat covers of familiar American tunes -- including "Hippy Hippy Shake" and lots of Chuck Berry numbers -- interspersed with originals courtesy of Farndell and Daneski.

In mid-1963, however, the band went through a series of sweeping changes. After crossing paths with the Rolling Stones -- then promoting their first single, "Come On" -- they decided to abandon their lighter, Beatlesque sound in favor of the harder, more aggressive sound played by the Stones, and to focus their originals and their covers more tightly on American blues. Toal left the group at around this same time for non-musical reasons and was succeeded by Chris Boyle, and the band was rechristened the Merchants and then the Beat Merchants. They were signed to EMI's Columbia label in mid-1964 and made their recording debut with a group original, "Pretty Face," which just missed the British Top 40 early that fall. That number, a crunchy guitar and harmonica-driven bluesy rocker, very much in the manner of the Stones or the early Yardbirds, with a furious attack that also recalled the early Who, would be the total extent of the group's success in England. They continued recording into 1965 and 1966, going through some more lineup changes, including founder Ralph Worman's replacement by Rick MacEvoy and then Alan Piggott on lead guitar, and the departure of Chris Boyle, after which Geoff Farndell and Gavin Daneski took over on vocals.

Indifferent sales success on EMI led to the group being dropped by the label, but not without some unexpected revenue coming out of the deal -- for reasons that no one was ever able to explain (though it may reflect the frantic pace of the business during the heyday of the British Invasion), their second single, "So Fine," was accidentally placed on the B-side of the American single of Freddie & the Dreamers' "You Were Made for Me" when the latter was reissued in America in early 1965; that reissue, on the Tower label, became one of Freddie & the Dreamers' biggest stateside hits, reaching the Top 20 and earning a gold record. Without a contract but enjoying a serious stage reputation, the Beat Merchants soldiered on with a sound that was harder still, built around a surging guitar and bass -- they cut demos that were as raw and powerful as anything coming out of the likes of the Small Faces or any other R&B-based band of the period, and the Farndell-Daneski songwriting team also showed some originality and sophistication, even as the group roared and pounded through covers of Muddy Waters and Chuck Berry songs. By 1966, despite the fact that they were hometown heroes and were able to earn a halfway decent living in Germany, the Beat Merchants, lacking a record contract and starting to fade from the music pages, called it quits. Farndell and Daneski kept working as composers for another year or two, generating the Bo Diddley-influenced punk jewel "Rich Girl," which just missed getting recorded by the Merseys. Later in 1968, they once again teamed up with Vic Sendall, this time in a group called Permissive Society, which lasted for a few months, before they all decided to give up the music profession permanently.In the decades since, the Beat Merchants' singles have acquired a serious reputation as quintessential examples of English freakbeat, that pre-psychedelic variation of garage punk unique to the U.K., on a par with the best music of the Creation. Indeed, "Pretty Face" has the punky, almost violent, streak found in the rawest British Invasion R&B singles, while "Messin' with the Man" is a more conventional treatment of a Muddy Waters song. "Pretty Face," "Messin' with the Man," and "So Fine" were issued as part of AIP's English Freakbeat series, and in 2000 Circle Records issued the first Beat Merchants CD, The Beats Go On..., drawn from their official EMI releases, various surviving demos, and a few publishers demos representing Daneski and Farndell's songwriting.