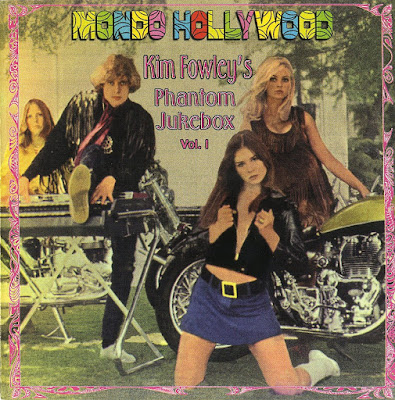 Review by Bryan Thomas
Artist, producer, writer, arranger, musician, and all-around first-class baloney-thrower Kim Fowley was the man on the scene in Hollywood, CA, during the mid- to late '60s. This collection compiles 20 tracks from Fowley's solo recordings, circa 1966-1969. The collection kicks off with the garage punker "Underground Lady" from 1966, which, Fowley is happy to point out, was released before the Count Five's "Psychotic Reaction" and the Music Machine's "Talk Talk." "The Trip" is a fascinating bit of drug-laced ephemera ("Summer's here kiddies/It's time to take a trip," Fowley leers in the intro) and one of the CD's highlights. "Fluffy Turkeys" was the A-side of one of Fowley's singles for the Original Sound label and surely must have creeped out label honcho Art Laboe, who bailed on releasing a planned full-length album after hearing this slice of madness. Fowley's version of the novelty hit "They're Coming to Take Me Away, Ha Ha!" was a hit in Denmark and on Radio London, and is a true psycho artifact of its day. The pop art extravaganza "Pop Art '66" might have influenced Fowley's chauffeur, Mark Wirtz, who later produced "Excerpt From a Teenage Opera" for Keith West. "The American Dream" is Fowley at his most accessible, while the garage psych of "Reincarnation" (one of several tracks included that were co-written by Michael Lloydof the Smoke) recalls the fury and vitriol of L.A.'s own Seeds, a band he later produced. This compilation isn't the final word on Fowley, but it's quite a statement. In the liner notes, Fowley -- who provides fun comments for each track -- recalls that "these selections were recorded by me to get girls, confuse people, and have fun...These recordings were one-off, hobby, experimental events. In the Silver '60s anyone could record. And we all did. It was a great time. You should have been there." This retrospective provides evidence that Fowley wasn't himself "all there" in the '60s. Nevertheless, it's fascinating to see all of the musicians and groups he's been involved with since then. Mondo Hollywood: Kim Fowley's Phantom Jukebox, Vol. 1 was produced for reissue by Joe Foster for his Revola label (at the time of its release, 1995, the reissue imprint was being distributed via Alan McGee's Creation Records). 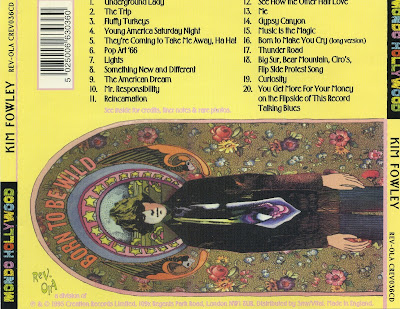