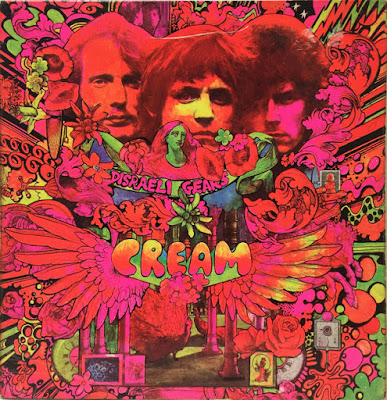 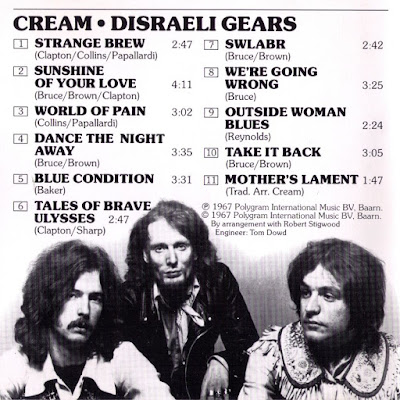 Disraeli Gears is the second studio album by the British rock band Cream. It was released in November 1967 and went on to reach No. 5 on the UK Albums Chart. It was also the group's American breakthrough, becoming a massive seller in 1968, and reaching No. 4 on the American charts. The album was No. 1 for two weeks on the Australian album chart and was listed as the No. 1 album of 1968 by Cash Box in the year-end album chart in the United States. The album features the two singles "Strange Brew" and "Sunshine of Your Love," as well as their respective B-sides "Tales of Brave Ulysses" and "SWLABR."

The original 11-track album was remastered in 1998, and then subsequently released as a two-disc Deluxe Edition in 2004.
Background
Title
Drummer Ginger Baker recalled how the album's title was based on a malapropism which alluded to 19th-century British Prime Minister Benjamin Disraeli:

You know how the title came about – Disraeli Gears – yeah? We had this Austin Westminster, and Mick Turner was one of the roadies who'd been with me a long time, and he was driving along and Eric [Clapton] was talking about getting a racing bicycle. Mick, driving, went 'Oh yeah – Disraeli gears!' meaning derailleur gears...We all just fell over...We said that's got to be the album title.

Original album
The album was recorded at Atlantic Studios in New York during May 1967, following the band's nine shows as part of Murray the K's "Music in the 5th Dimension" concert series. Cream's American label, ATCO, was a wholly owned subsidiary of Atlantic Records.

The sessions were produced by future Mountain bassist Felix Pappalardi – who co-wrote the tracks "Strange Brew" and "World of Pain" with wife Gail Collins – and were engineered by Tom Dowd – who would later work with Clapton on projects such as Layla and Other Assorted Love Songs and 461 Ocean Boulevard. Atlantic Records owner Ahmet Ertegun was also present during the sessions.

According to Dowd the recording sessions took only three and a half days, a feat considering the length of the album. The band's visas expired on the very last day of recording.

The original 11-track album was remastered by Joseph M. Palmaccio at PolyGram Studios for a 1998 release, including bonus photographs accompanying the original album artwork.

The "Disraeli Gears Deluxe Edition" includes the complete album in both mono and stereo, demos, alternative takes and tracks taken from the band's live sessions on BBC radio. Included is an outtake of "Blue Condition" with Eric Clapton on lead vocals and demos of the songs "Weird of Hermiston" and "The Clearout" which were not released until Jack Bruce's first solo album "Songs for a Tailor".

The cover art was created by Australian artist Martin Sharp who lived in the same building as Clapton, The Pheasantry in Chelsea. Sharp would go on to create the artwork to Cream's next album Wheels of Fire and co-wrote the songs "Tales of Brave Ulysses" and The Savage Seven movie theme "Anyone for Tennis" with Clapton. The photography was by Bob Whitaker, known for works by The Beatles including the controversial Yesterday and Today "butcher" cover. Most of the photographs were taken in July 1967, with shoots in London's Hyde Park as well as in the Scottish Highlands. Some of the images were shot on Ben Nevis, the tallest mountain in the British isles. The photos show a clean-shaven Clapton with a bouffant, permed hairstyle. By the time of the album's release in November, however, he was letting his hair grow out straight and had grown a moustache.

The front cover consists of a psychedelic collage with the title centred and band name below, surrounded by a floral arrangement. Martin Sharp was attempting to capture the sound of the music in the cover, which he describes as a "warm fluorescent sound"

I got hold of a publicity shot and cut it up, along with cutouts from various books, laid the pieces out and stuck them together as a collage on a 12-inch square. I did some drawing outlines, and then painted all over it with fluorescent inks and paints of the time. I really wanted to capture that warm, electric sound of their music in the colours and expression of the cover. On my way to England, I'd gone [to Cambodia]. And in one of the towns I visited, there were these amazing sculptures with faces on each side, and huge trees growing out on top… Over the years, these great trees had taken root and grown. I suppose I thought that was a bit like the band: where you could see three faces, and the music coming out of their heads.

The cover art was later used for the compilation Those Were the Days.

Disraeli Gears features the group veering away, quite heavily, from their blues roots and indulging in more psychedelic sounds, in particular on tracks such as "Tales of Brave Ulysses," "SWLABR," "World of Pain," and "Dance the Night Away," the latter of which features a 12-string guitar (the only time the instrument would be used on a Cream recording). The most blues-like tunes on the album are Clapton's arrangement of "Outside Woman Blues", the Bruce-Brown composition "Take it Back" which had been inspired by the contemporary media images of American students burning their draft cards which featured harmonica work by Jack Bruce, and the opening track "Strange Brew" which was based on a 12-bar blues song called "Lawdy Mama" and featured an Albert King guitar solo, copied note for note.

Unlike the previous Fresh Cream, which was vocally dominated by Bruce, the vocals on Disraeli Gears were a more democratic affair. Clapton sings lead on "Strange Brew" and "Outside Woman Blues" and co-lead on "World of Pain," "Dance the Night Away," and "Sunshine of Your Love." Baker, meanwhile, performs lead vocals on his composition "Blue Condition." All three band members sing together on "Mother's Lament."

In contrast to much of the band's other work, Disraeli Gears is composed mainly of short, self-contained songs, with none of the improvisation and jamming the band was known for onstage.

Writing for the BBC, Chris Jones described the album as "a perfect encapsulation of the point where the blues got psychedelic and in turn got heavy". Thomas Erlewine of AllMusic describes the album as "a quintessential heavy rock album of the '60s". Dave Swanson of Ultimate Classic Rock believes the album to be "their masterpiece".

In 1999, the album was inducted into the Grammy Hall of Fame.

Email ThisBlogThis!Share to TwitterShare to FacebookShare to Pinterest
tags Cream