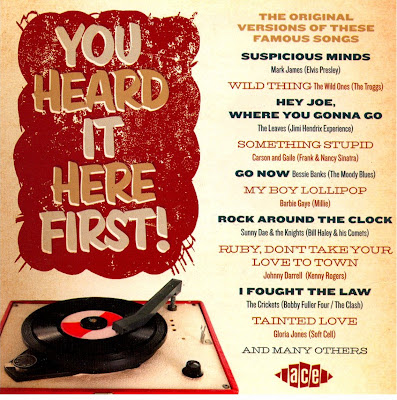 You Heard It Here First! (Original Versions of Famous Songs)

- These tracks embrace some of the greatest country, soul, pop, rock`n'roll and R&B tunes ever recorded. We may never know why these songs did not become hits first time around, but musical inferiority is certainly not among the reasons why they didn't.
- Some of these originals are well known, others are hardly known at all. Most people with a passion for rock`n'roll will know that Richard Berry wrote and recorded the original `Louie Louie', but hardly anyone will know that the Kingston Trio and Mark James did `Get Together' and `Suspicious Minds' before the Youngbloods and Elvis Presley did.
- Hear how `Rock Around The Clock' sounded three years before Bill Haley and the Comets got to it, or how the Crickets `Fought The Law' almost half a decade before the Bobby Fuller Four and 15 years before the Clash did. Find out where Led Zeppelin acquired the source material for `Whole Lotta Love' and the Animals got `Baby let Me take You Home' from. Marvel at how closely the later hit versions were often modelled on these originals, and wonder how come they weren't hits in their own right. 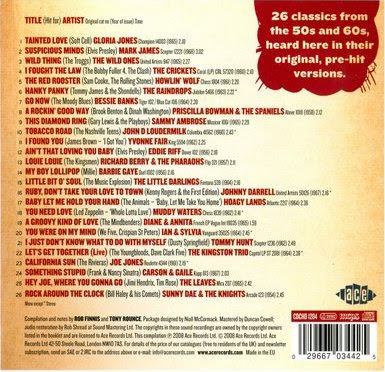 All collectors like a bit of musical trivia, and “who did it first” is a game that’s often played when the most hardcore of them get together to swap matrix numbers and that sort of thing. Most buyers of Ace CDs will know that many of the biggest hits of the 1960s and 1970s were recycled from earlier 45s that had failed for those who did them originally. And the failure of some of those ‘earlier 45s’ is ‘celebrated’, if you like, by the release of “You Heard It Here First”, featuring two dozen and two excellent tracks – by, in many cases, high-profile talents – that never got to have their day in the sun at the time of their release.

While it would be a lie to say that everything that’s featured here is a can’t-fail, 100% chiselled-in-stone classic, it really is difficult to see why most of our selections did not catch on with the general public in the way that the later hit versions did. Admittedly, some of them were hidden on B-sides or tucked away on albums, waiting to be discovered by artists and managers with a good ear for a potential hit. Others were issued at times when the music that they represented was not in vogue, for one reason or another. But there’s simply no viable explanation for the relative to complete chart failure of tracks like Joe Jones’ ‘California Sun’, Bessie Banks’ ‘Go Now’ or Tommy Hunt’s ‘I Just Don’t Know What To Do With Myself’, especially when the versions that eventually became hits a few years later were, in all honesty, not even half as good. Even though the competition for chart placings was much fiercer when all of these tracks first appeared, there’s no valid reason why any of them should have failed.

Some of these 26 originals are now quite well known, thanks in no small way to the belated publicity that their succesful revivals have brought them. Others will amuse and amaze even the most tightly zipped ‘know it all’ anorak – how many people outside of obsessive record collecting’s inner sanctum will have heard of Diane and Annita’s first cut of ‘A Groovy Kind Of Love’, or the Wild Ones’ ‘Wild Thing’, much less actually heard the records in question? And how many have gone their whole lives enjoying Bill Haley’s earth shattering revival of the song without knowing that there was an original of ‘Rock Around The Clock’, made three years previously? These are just a few of the fascinating ‘first versions’ that “You Heard It Here First” is presenting, in their best ever sound, for your musical pleasure. So confident are we that Ace fans will like it that Rob Finnis and myself are already planning Volume Two, along with a ‘sister volume’ called “You Heard Them Here First” that focuses on early recordings by people who went on to far greater fame and fortune further down the line.
By Tony Rounce