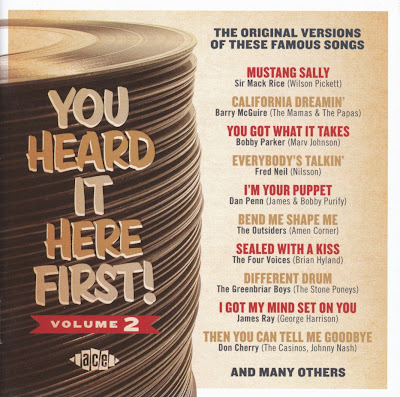 The original versions of 26 hit rock and (in lesser frequency) pop, soul, and country songs from the 1950s and '60s are on this highly entertaining CD. These are not the sort of songs that will be recognized only by collectors and historians; these are songs that became big hits when they were covered by other artists, from "Rock Around the Clock" and "I Fought the Law" to "Wild Thing" and "Suspicious Minds." And even if you're an extremely knowledge historian/collector, it's doubtful you've heard, let alone owned, every single one of these tracks. A few of these originals are relatively well known, like Bessie Banks' soul classic "Go Now" (covered by the Moody Blues), Joe Jones' "California Sun" (made into a surf hit of sorts by the Rivieras), and Richard Berry's perennial "Louie Louie." But certainly relatively few people even know of the existence of original versions such as the Wild Ones' "Wild Thing," Sunny Dae & the Knights' "Rock Around the Clock," the Little Darlings' "Little Bit o' Soul," Carson & Gaile's "Something Stupid," and Eddie Riff's "Ain't That Loving You Baby" (the song made into a Top 20 1964 hit for Elvis Presley, not the Jimmy Reed blues classic), for instance. To some listeners, hearing these rarities might come as a disappointment when you hear how relatively little the hitmakers changed some of the arrangements, like Mark James' "Suspicious Minds" (redone by Presley) and the aforementioned "Little Bit o' Soul," done by the obscure British group the Little Darlings three years before the Music Explosion had a huge U.S. hit with it. Yet there are also some songs that were substantially different and occasionally even superior in their first appearance, Gloria Jones' storming soul stomper "Tainted Love" being the most outstanding example. While not superior to the remakes, Hoagy Lands' Sam Cooke-like "Baby Let Me Hold Your Hand" is certainly way different from the Animals' mutation of the same tune into "Baby, Let Me Take You Home," just as Johnny Darrell's "Ruby, Don't Take Your Love to Town" is from the Kenny Rogers remake and Yvonne Fair's "I Found You" is from James Brown's "I Got You," which the tune evolved into three years later in the Godfather of Soul's hands. Most of the cuts, too, are just plain fine on their own terms, like Muddy Waters' "You Need Love" (the basis of Led Zeppelin's "Whole Lotta Love") and, to again cite one of the most obscure tracks here, Diane & Annita's fetching soul-pop duet "A Groovy Kind of Love," made into a British Invasion hit by the Mindbenders. As one very minor criticism, "You Were on My Mind" (later a folk-rock hit for the We Five) is not represented by Ian & Sylvia's very first original version, but a later one that included some overdubbed drums. 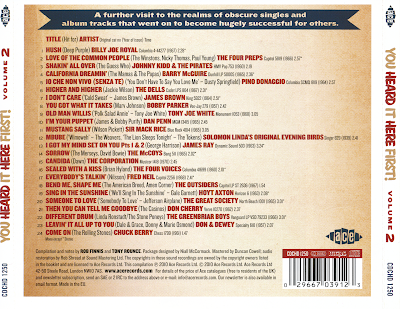