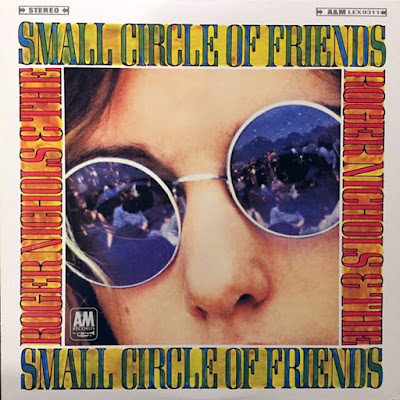 Born in Missoula, MT, Roger Nichols and his parents moved to Santa Monica, CA, when he was a one-year-old. His household brimmed with music when he was growing up. His dad was a journalism graduate and a professional photographer who played sax in local jazz bands. His mother was a music major and a classical pianist. When Nichols started grade school, he picked up the violin, continuing his violin and classical studies throughout grammar and high school. His attention turned to basketball and Nichols forsook violin for the hoops but played guitar on the side.

Recruited to U.C.L.A. on a basketball scholarship, Nichols played on the team for a year or two. Confronted to make a choice between music or basketball by his coach John Wooden, Nichols chose music. While in college, he majored in music and cinematography while still playing the guitar and adding the piano. After a brief hiatus, he returned to U.C.L.A. and began taking songwriting courses. After he left college, Nichols took a variety of jobs, working in a bank for two years, a liquor store for a year and a half, and serving six months in the navy. On weekends, he worked in clubs with his group, Roger Nichols and a Small Circle of Friends, that performed original songs written by Nichols.

Around 1965, the group was signed to a recording contract by Liberty Records. While at the label, the group briefly had the opportunity to work with Tommy Li Puma. Li Puma thought the group had some potential, but left Liberty shortly thereafter. With the label for eight months without having a record released, Nichols called A&M Records expressing interest in playing some demos for label co-owner Herb Alpert. He was switched to Li Puma who had been hired as the A&R man for the new label. Li Puma was still enamored of the group. Nichols then asked for and received a release from Liberty Records.

While Nichols waited for Li Puma to finish producing the Sandpipers and Claudine Longet, he wrote an instrumental for Alpert that he promptly recorded a week after hearing it. Though Roger Nichols and a Small Circle of Friends wasn't a big seller, Alpert urged A&M publishing company head Chuck Kaye to sign Nichols as a songwriter to their company.

During his second year with the company, Kaye introduced Nichols to lyricist Paul Williams. The first song that wrote was recorded by Claudine Longet, "It's Hard to Say Goodbye." The duo wrote together for four years, resulting in lots of album cuts, B-sides, even A-sides, but no hits.

An advertising executive approached a friend of Nichols asking for help with an under-budget commercial project for Crocker Bank. Nichols' friend gave him a copy of the Roger Nichols and a Small Circle of Friends album. The ad exec called A&M and made an appointment with Nichols and Williams to discuss the project. The exec said that he only had 300 dollars to make a demo and the rest of the project had to be done on speculation that the project would pan out and become a successful ad campaign, in which case this would lead to more money. Hoping to capture the youth market by softening the bank's image, Nichols and Williams were given the slogan, "You've got a long way to and go and we'd like to help you get there." They had just ten days to create a song, essentially a jingle. Waiting until the last day, after they've completed other projects, Nichols started noodling around on the piano and wrote the basic verse melody in a half hour. Williams joined him later and come up with some lyric lines. On the demo, Nichols overdubbed piano, bass, and guitar while Williams sang. It was approved by the bank who requested that they complete the song, which at that time included two verses and a bridge.

Crocker Bank had the advertising rights to the song, but the duo, along with A&M, retained the recording and publishing rights.

Richard Carpenter of the Carpenters heard the jingle on a TV commercial, and although signed to A&M, didn't know who wrote the track. He found out and the Carpenters recorded the song. "We've Only Just Begun" was nominated for a Grammy for Song of the Year, was included on BMI's million performances list, and received an award for selling a million copies of sheet music. Another Nichols-Williams song, "Out in the Country" by Three Dog Night, landed in the Top Ten. Six months later, "Rainy Days and Mondays" was another gold record by the Carpenters and Nichols' third gold record in a single year. Other hits were the Carpenters' "I Won't Last a Day Without You," "Travelin' Boy," and "I Never Had It So Good," covered by Barbara Streisand.

In 1972, the Nichols-Williams team parted ways. Somewhat disgruntled, Nichols returned to his native Montana, bought a house, and relaxed. A few years later, he returned to composing and primarily background scoring. In later years, Nichols' hits were more associated with the TV shows that he scored like "Love Theme From Hart to Hart." 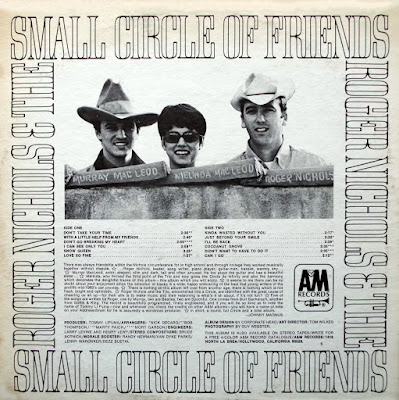 A true sleeper in the context of California pop. As a songwriter, Roger Nichols wrote with such luminaries as Paul Williams and Tony Asher (fresh from his collaboration with Brian Wilson on Pet Sounds, who co-wrote several of the selections here). The album is a lot of things at once. Soft pop, a smattering of rock, and a heavy dose of easy listening. The group itself has a great vocal blend. Nichols is joined by Murray MacLeod and his sister, Melinda. The three voices combined create a wonderful, soft sheen, equally effective on the ballads (Bacharach's "Don't Go Breakin' My Heart") and uptempo numbers ("Don't Take Your Time"). There is an extremely gorgeous version of the Goffen & King song "Snow Queen," which is a graceful waltz, underpinned by the groups' superb vocals. The credits on the album are a virtual who's who of California pop at the time. Among those who helped out on the project on one way or another are Lenny Waronker, Van Dyke Parks, Bruce Botnick, and Randy Newman. Superbly produced by Tommy LaPuma, the album unfortunately didn't do very well at the time of its release, which is an incredible injustice. The music, though, holds up extremely well today, and is an authentic slice of California pop. Delicious.