The Zipps - Be Stoned! Dig : Zipps 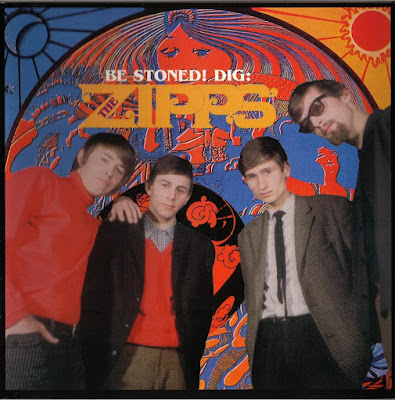 Dutch freakbeat band the Zipps formed in Dordrecht, the Netherlands in the fall of 1965. Lead guitarist Peter Nuyten and drummer John Noce Santoro previously teamed in the Moving Strings, who issued a pair of singles on the Delta label before dissolving, while singer/guitarist Philip Elzerman and vocalist Jan Bek came to the Zipps lineup from the Beat Town Skifflers, and bassist Theo Verschoor tenured in the Twilights. Bek quit the Zipps prior to the release of their debut single, "Roll the Cotton Down," issued in early 1966 on the Op-Art label; after signing to the Relax label, the group issued two more singles that year, "Chicks and Kicks" and "Beat and Poetry." Beginning with 1967's "Marie Juana" — a record which required significant lyrical revisions before Relax censors would agree to its release — the Zipps steered their garage-influenced sound towards psychedelia, and thanks in part to their hallucinatory light show, they earned the sobriquet "The Dutch Pink Floyd"; Elzerman openly espoused drug use in interviews, and stickers reading "Be Stoned! Dig: Zipps Psychedelic Sound" were distributed at live dates. After backing French pop singer Philippe Salerne on his singles "Elle" and "Venez Voir Comme On S'Aime," the group replaced Santoro with drummer Wim Klein, but after a December 1967 date in support of the Electric Prunes and the Soft Machine, the Zipps dissolved when Nuyten, Verschool, and Klein all announced their exit. Elzerman and Santororeformed the group in early 1968, adding guitarist Dick VisschersDick Visschers and bassist Ruud van Seventer for one final single, 1969's "When You Tell It, Tell It Well..!" The Zipps eventually disbanded for good, and in 1999, the Dutch label Pseudonym compiled all of their singles, the Philippe Salerne sessions, and a handful of live cuts for a retrospective titled Be Stoned! Dig: Zipps. In December 2001, a Zipps lineup consisting of Elzerman, Nuyten, Santoro, van Seventer, and former Heatwave keyboardist Janco Barut reunited for a hometown performance in Dordrecht; the following year, "Chicks and Kicks" was included on the second Nuggets box set. 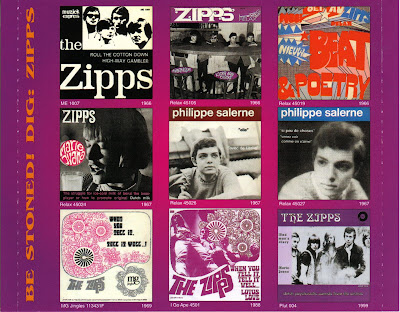 Though the Zipps didn't release many records, their scant official discography -- all of nine tracks -- is contained on this reissue, which is boosted to a running time of more than an hour with the addition of some demos, previously unreleased live recordings, a couple previously unissued stereo versions, a couple cuts on which they backed French singer Philippe Salerne, and an interview. While the cocky beat-punk rebellion of their most famous single, "Kicks and Chicks," has a deserved reputation among '60s Eurobeat collectors (and a place on the Nuggets, Vol. 2 box set), it's not entirely typical of the group's recorded repertoire. Their previous single, "Highway Gambler"/"Roll the Cotton Down," has a more pronounced folk-blues influence, albeit with a similar punkiness. As more of a contrast, their two-part epic "Beat & Poetry" seems like a stream of consciousness narrative, much of whose artistry will be lost on international listeners as much of it's related in Dutch. Things take a more Baroque psychedelic direction on "Marie Juana," with risqué (if quite ambivalent) lyrics about marijuana -- the group, interestingly, tells the evil weed to go back to where it belongs, rejecting it in favor of music. This and other late-period songs like "The Struggle for Ice-Cold Milk of Benzi the Bassplayer" or "How to Promote Original Dutch Milk" indicate these guys might have had a surreal sense of humor that doesn't wholly translate well decades down the line, especially as they have heavier Dutch accents than the average '60s group from Holland. All of this might be a longwinded way of saying that this isn't such a fine or consistent listen, and that there isn't anything else here as memorable as "Kicks and Chicks." But it's OK if you go for this sort of rebellious attitude-heavy Eurobeat thing, and if you do like "Kicks and Chicks" prepare yourself for three versions (the original, the previously unreleased stereo variation, and a live recording). 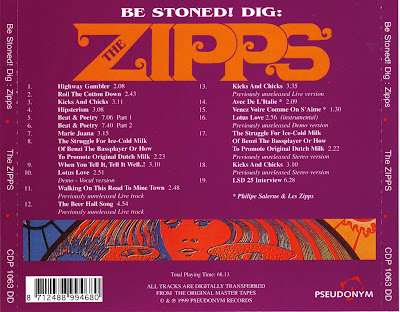