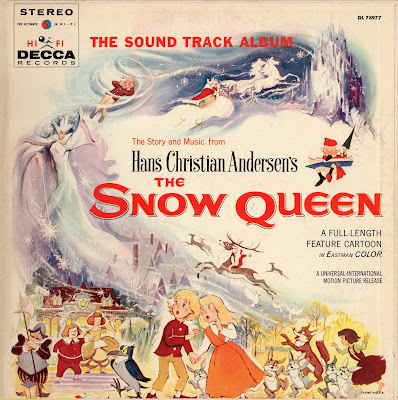 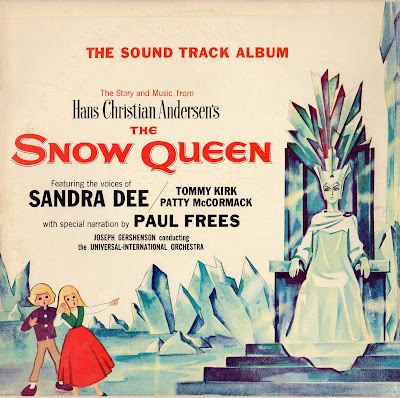 Since Winter is Apon Us Here in Scotland And Cold Wet And Icy and I think we are in for some Snow....I Think this Album ia Appropriate.

The Snow Queen (Russian: Снежная королева, Snezhnaya koroleva) is a 1957 Soviet animated film directed by Lev Atamanov. It was produced at the Soyuzmultfilm studio in Moscow and is based on the story of the same name by Hans Christian Andersen. The film was re-released with English soundtracks in 1959, 1993, and 1995.

This is Hans Christian Anderson's The Snow Queen (Decca DL 78977, Stereo, 1959). In addition to Sandra Dee, you get the voice talents of Tommy Kirk, Patty McCormack & Paul Frees, with music from Joseph Gershenson conducting the Universal-International Studio Orchestra.
This is the soundtrack to a film that was made in the Soviet Union, then brought to the US where it was dubbed into English and released onto the market in 1959. this soundtrack is not just the songs and dialog from the movie, it also includes narration to explain what's going on, possibly making it one of the first records to do so. It also features a couple of straight songs from Sandra Dee, at least one of which was released as a single.

There is That Child Thing in all of Us,,Enjoy

Email ThisBlogThis!Share to TwitterShare to FacebookShare to Pinterest
tags The Snow Queen