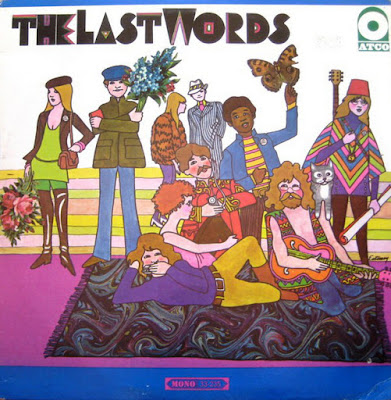 Not to be confused with similarly named English and Ohio-based bands (as well as an Australian punk outfit), New York's The Last Words featured the talents of guitarist Mike Byrnes, drummer Roger Cook, singer Johnny Lombardo and keyboardist Steve Sechak.
Formed in 1966, the quartet relocated to Miami, Florida where they were quickly signed by Henry Stone's small Boom label. Propelled by Lombardo's suitably gruff voice, they debuted with the single:
1966's 'Hot Summer Days' b/w 'Bidin' My Time (Boom catalog number 60014).
A competent slice of garage rock, it failed to sell but attracted the attention of Atlantic's ATCO subsidiary which signed them to a contract the following year.

Released in 1967, the band enjoyed an unexpected top-100 hit with their blue-eyed soul single 'Can't Stop Lovin' You' b/w 'Don't Fight It' (ATCO catalog number 6498). For some off reason the single was credited to The Last Word (note the singular name).

More than happy to capitalize on their hit, ATCO rushed the band into the studio to record a supporting album. The cleverly-titled "The Last Words" teamed the band with producers Brad Shapiro and Steve Alaimo. Musically the set wasn't particularly impressive.  As was standard marketing procedure, the collection offered up a mix of popular covers (a dirge tempo cover of The Beatles' 'No Reply' being one of the highlights) and severall marginal originals. While Lombardo had a decent voice and Byrnes was a surprisingly accomplished guitarist (with a nice touch for fuzz effects), the band's penchant for ballads and nauseating soft rock arrangements ('One More Time', a truly strange cover of 'Be My Baby' and 'A Basket of Flowers'), left a great deal to be desired. The band was far more interesting on atypical rockers such as their cover of The Raiders' 'Mor'een' (which was subsequently released as a single),, Lombardo's 'It's Not Over' and their spastic, slightly lounge act-ish cover of The Who's 'The Kids Are Alright'.
Yeah it was a band original, but to my ears 'One More Time' sounded like a sluggish, '50s-tinged country-flavored tune.  Lombardo's voice was okay, but other than Mike Byrnes' totally out of place fuzz guitar solo, the song didn't have anything going for it.  No idea why ATCO decided to tap it as a single.  It gets an extra star for the guitar solo.

Opening up with an almost a Baroque feel, complete with Steve Sechak harpsichord and bells, they turned in one of the strangest covers of 'Be My Baby' you'll ever hear.  If you ever wanted to hear the song as a funeral dirge then here's your opportunity.   Kudos to Roger Cook for the interesting drumming.

Previously recorded by Paul revere and the Raiders, kicked along by Byrnes' snarling fuzz guitar, 'Mor'een' was one of the album's highlights.   Great rocker that probably would have seen some commercial action had it been released a year earlier.  It was also plucked as the third single off the album.
Slowed down to a crawl, their cover of The Bealtes' 'No Reply' didn't immediately jump out at you, but with more than a touch of lysergic influences and some cool Byrnes lead guitar, it grew on you.
Opening up with some meltdown Byrnes guitar, 'A Basket of Flowers'  couldn't make up its mind whether it wanted to be a ballad or a rocker.  That indecision ultimate killed what could have been a standout performance.
Side two started with one of the strangest Who covers I've ever heard.  Lombardo and company managed to simultaneous give the song a garage rock edge and a lounge act vibe.  The garage rock vibe came courtesy of Byrnes guitar and Sechak's jumpy organ, while Lombardo's vocal added the lounge act feel.  Way, way strange ...
The album's second best original number (explaining why it was previously tapped as a single), 'Can't Stop Lovin' You' managed to find a likeable blend of punk energy and blue-eyed soul commercialism.  Another album highlight.
I'm not sure why these guys felt the need to slow so many tracks down to a dirge tempo, but their cover of 'You've Lost That Lovin' Feelin'' was a perfect example of what not to do when recording a pop classic.  The results were simply horrible with Lombardo sounding like he was trying to sound like a drunken lounge singer.  even Byrnes freak-out fuzz guitar solo couldn't save this one.   Shame it was wasted here.  Yech !!!   One extra star for the guitar solo.
Written by Lombardo, 'It's Not Over' was another track that somehow managed to span the garage-pithy pop boundaries.  Not sure how they managed to keep falling into this weird no-man's musical territory.  With a tougher vocal this song couldn't have been dynamite.
Musically 'I Wish I Had Time' found the band way over on the pop side of the meter, but the results were surprisingly entertaining with nice backing vocals and some interesting guitar effects from Byrnes. 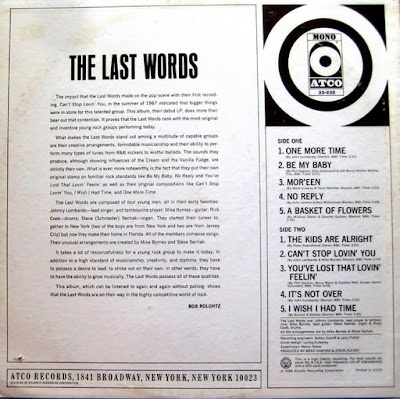 Email ThisBlogThis!Share to TwitterShare to FacebookShare to Pinterest
tags The Last Words